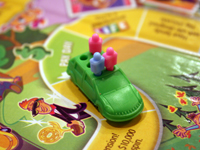 Game night at the Smucker house. Popular choices recently have been “Ticket to Ride” or “Blockus,” strategy games that I love playing with my kids because I can see their little brains working hard to figure things out.

Recently though, they’ve been going with an old standby from my childhood. I loved this game when I was growing up, but after playing it the other night, I’m not so sure.

What game could get my attention so much that I’m blogging about it?

The Game of Life.

There’s been a lot of talk in the blogosphere lately regarding the messages our kids take in, thanks to the documentary “Miss Representation.” A few of my friends have posted blogs about it, including a well-written piece by Alise Wright.

But not my kids, I thought to myself. We only watch Netflix, so no commercials there. We homeschool (at least until next year), so their influencers make up a short list.

Then we played the game of Life. What’s the first thing my 8-year-old son says when my daughter picks out her car and puts her player peg into the driver’s seat?

“Lucy, you can’t put the girl on that side. That’s the driver’s side.”

“Cade, why would you say that?” I ask. “Your mother drives our car all the time.”

“Okay,” he says, shrugging, clearly thinking that was a rule of the game.

“Okay, dad,” she says, happy that her car will now have a driver. Namely, her.

There are other things I learned that I don’t like about the game of Life. I don’t like that you can borrow as much as you’d like and pay it back when you finally have enough money. This attitude towards borrowing has made a train wreck of many lives.

I don’t like that the game reinforces this formulaic passage without leaving room for alternatives: go to school, get married, have kids, and if this isn’t happening, then you’re left behind.

But most of all, I don’t like how the game ends: whoever has the most money wins. Really?

It’s easy to see why humans (and especially Christians) have a long and colorful history of banning things. My first reaction after this gaming experience was a simple thought:

Well, we’re not playing that again.

But, wait. Why not? Playing that game again, explaining these things to my children that don’t make sense, talking them through some of the ways this game is not an accurate portrayal of life…wouldn’t that be the best way forward?

Banning something is rarely effective in curbing its message; in fact, banning things usually only serves to propagate the very messages we are trying to counter. So what diffuses these messages?

What did your parents ban from your house when you were young?

For more thoughts regarding my daughter driving her own car through The Game of Life, check out a guest post I did for Rachel Held Evans, “A Letter to My Daughters”