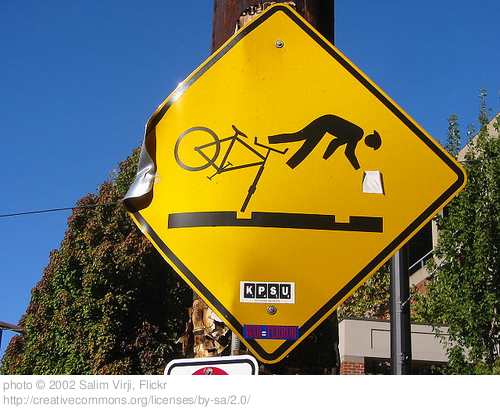 This is Lucy’s first year riding bike without training wheels. This weekend she rode her tiny, pink bike in circles, calling out to me across the yard.

Oh, the wails! Oh, the cries! In that moment, from her perspective, her knee was broken and she’d never walk again. Not too much later, she limped from her seat to where I gathered firewood. Later that night she ran through the yard with her friends.

Much has been made of failure in recent years. Books like “Failing Forward” and “Success Through Failure” touch on the important role of failure in progress. “Too Big to Fail” became a catchphrase, a rallying cry that basically said, for some, failure is not an option.

What’s your view of failure?

While failure always offers a few lessons on how make progress and move forward, there’s one aspect of failure we are often eager to overlook.

“It’s more important to be a mature Christian than to be a great butcher or baker or candlestick-maker; and if the only chance to achieve the first is to fail at the second, the failure will have proved worthwhile. Isn’t failure worthwhile if it teaches us to be gentle with the failure of others, to be patient, to live in the wisdom of accepted tenderness, and to pass that tenderness on to others?” (Brennan Manning, “The Wisdom of Tenderness”)

It’s more important to become more mature than to move closer to perfection.

This brings me back to Lucy’s recent crash. I’m sure she learned valuable lessons about how to become a better bike rider, things like “don’t turn the wheel too hard,” “don’t lean too far,” and “put your foot down when you feel yourself tipping over.” All of these will make her a better bike rider. But, as her father, I wonder: Did her pain make her more aware of the pain of others? When someone else crashes in the future, will she find herself being gentle and tender with them because of this shared experience?

Theoretically, each failure can bring us closer to perfection.

But perhaps the most valuable question we can ask after failure is this: are we letting it bring us closer to kindness?

What have you learned from failure?