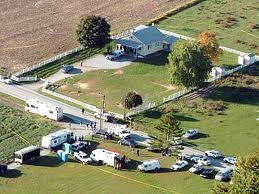 The empty field grabbed my attention and slowed my jog to a walk. I couldn’t help but stare at the lush grass now watermelon green after the recent hurricane.

A few of the girls died outside the schoolhouse, I thought to myself. I wonder where?

But there’s no sign a schoolhouse ever existed there – only a large, warped tree, a few fences, a few grazing animals.

I started jogging again and passed the community pool: Nickel Mines Pool and Swim Club. Monday was the first day of school, and the pool was closed, empty. I continued up the road to the old auction house. Some folks had told me they saw Charles Roberts standing there at the corner beside the Coca-cola machine, staring down towards the Amish schoolhouse, just before he drove down, went inside, and eventually opened fire.

As I jogged those back country roads, passed occasionally by a car or truck (whose driver and occupants almost always waved to me), I thought about the tragedy that struck this community five years ago this October. I thought about the sadness that still dwells in Nickel Mines like an early morning fog. I thought about all of the hurt and lifelong pain caused by one man.

This is what unforgiveness will do, if you hang on to it. No, it’s not likely to cause you to go out and shoot ten little girls…but it might lead to the end of your marriage, or the splintering of your family, or the loss of a friendship. Think of all the pain unforgiveness causes in any given day.

What happened in Nickel Mines is a visible reminder of where unforgiveness will take you, if you let it.

Every time I pass that school, I’m reminded that while forgiveness takes serious effort, it’s unforgiveness that will eventually cost me everything.

6 Replies to “The Most Costly Decision You’ll Ever Make”