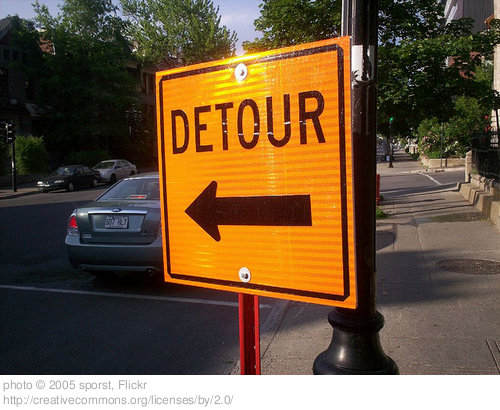 I’m not a big fan of that word.

So when a row of orange cones and a large Detour sign told me that 322 East had succumbed to the turbulent influences of Irene, I wasn’t happy. My friend needed to get to the Philadelphia airport, and that Detour sent us off the familiar path.

First, we found ourselves in a long line of barely moving traffic, nestled on a small road that wound through the wealthy Philadelphia suburbs. Huge houses with iron gates hid behind large trees and stone walls. An hour later we drove under I-95, the very road we wanted to be on. Another Detour.

We drove through a district full of warehouses and factories, the picture of some sort of post-apocalyptic world. I saw cars. I saw buildings. But I didn’t see any people.

Then, beyond this buffer, we entered a rough part of the city. Row after row of forlorn houses, boarded up shops and lonely people sitting on the front steps of vacant buildings. Huge cracks split the streets into crumbling surfaces; the sidewalks jutted up like teeth ground down to nubs.

“I have to go to the bathroom,” my friend insisted. Another detour.

We parked in front of a small gas station. Having grown up surrounded by cornfields and neighbors I knew, I wasn’t exactly comfortable in this new environment. Sullen looks were sent my way. Suspicion. Disdain, perhaps? Then, out of no where, our savior arrived in the form of a chirpy, short, very round African American woman.

She didn’t seem to have a care in the world.

“You’re lost, aren’t you?” she asked, smiling, her voice loud and cheery. I nodded, disarmed by her kindness.

Five minutes later we were on our way. We passed a boarded up night club. The owner fiddled with the lock while laughing with three other men. We stopped at a traffic light and I saw a woman sitting on some steps, her elbows on her knees, her chin in her hands. The entire time we waited for the light, she sat there, unmoving. Staring.

The helpful woman’s directions got us where we needed to go. But after I dropped my friend off at the airport I spent the entire drive home thinking about that small section of the city. I didn’t like it that I felt more comfortable driving through the wealthy, isolated suburbs than I did standing at that gas station surrounded by people. That detour gave me a heavy heart.

What can one person do in the face of such hopelessness? Nothing, I guess, as long as I keep seeing it as a detour.

One Reply to “When Your Detour is Someone Else’s Destination”