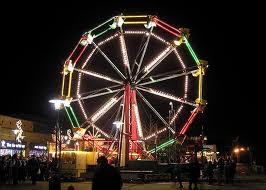 We pull up beside the old trailer. Its silver outside flakes off, like that rock with the oily skin. Rust seeps down from the top corners like old blood, and even from the ground I can see the tin strips from where my cousin patched the roof years ago.

And the tire is flat. The tire is always flat. Each and every year we show up at the storage facility where we park our trailer, and the tire reminds me of the Shel Silverstein book, “The Missing Piece Meets the Big O.”

Of course we are prepared for this. At The Great Frederick Fair you must be prepared for everything: flat tires, blown fuses, broken tables, hands cut on slicers, and children too tired to stay awake. We pull the small pump out of the trailer, hook it up to the lighter in my dad’s Jeep, and turn it on. Fifteen minutes later we are towing the trailer across the street to the fairgrounds.

We are using a Jeep Grand Cherokee to pull the overweight trailer. Everyone we pass pauses, their necks turning like flowers towards the sun.

“I know, I know,” my dad shouts at them through the open window. “That’s quite a load. Don’t even say it.”

They laugh at him. He has a way of getting to know complete strangers in two sentences, without them saying a word, and by the looks on their faces I can tell they like this strange man who puts even his Jeep at risk to show up at the fair. They shake their heads and grin at one another. They will tell their families about it over dinner.

“You should have seen the load this guy was pulling with his Jeep. He was doing a wheelie all the way into the fairgrounds, up on his back wheels.”

52 years ago my grandma and grandpa, who were Amish at the time, came to The Great Frederick Fair in Frederick, Maryland in order to run a small food tent for the week. Their product? Ham and cheese sandwiches. In those days they were one of only two or three other food vendors, and before they knew it the crowds had mobbed their tent looking for something to eat.

At one point they were so busy they walked around behind the tent and laughed until their sides ached, completely ignoring the raucous crowd crying out for more ham and cheese sandwiches. They couldn’t believe it.

My dad and I come down here on the Wednesday before the fair starts in order to begin setting up. The fairgrounds is like a ghost town during these preliminary days. Vendors run their drain lines and connect to electricity. Everyone is unloading something, or hooking something up, or fixing something that broke at the end of last year. The carnies begin pulling in, loaded down with the monstrous, disassembled pieces of ferris wheels that look like dinosaur bones.

Wednesday night we always eat at Bob Evans. I don’t know why – it’s not my favorite restaurant. Tradition rules here at the fair. This year I convinced dad to go to Red Robin, but something about the whole thing didn’t feel right. I ducked down a little when we drove past Bob Evans on the way to the motel – I hoped he didn’t catch our restaurant infidelity.

Now we’re in the motel. Lights out. Dad is in the next bed over and he’ll probably be snoring soon, so I’d better go to sleep. He always wakes up so stinking early.

3 Replies to “Frederick Fair, Day One: The Flat Tire”