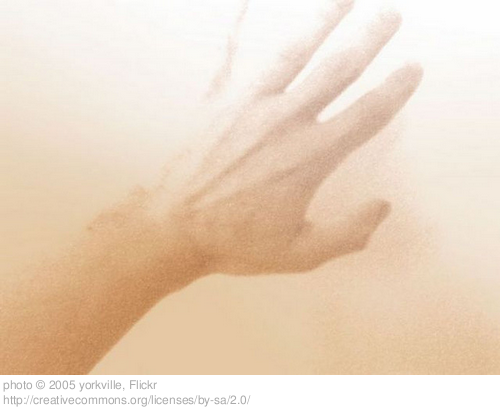 If there’s one constant at the fair, it’s noise. Country music scratches loudly from the speakers mounted on telephone poles; vendors shout out their offers (“Turrrrrkey Legs!”); the tractor pull roars as frustrated vehicles bog down; and people people people talk talk talk.

So when you encounter silence of any kind, it first strikes you as out of place. One of these things just doesn’t belong here.

I’d never seen such a quiet group of kids. They hovered near the fairground’s exit, all wearing fluorescent orange shirts, no one saying a word. Everything about them seemed like any other group of kids at the fair – they ran around, they smiled, they took in all the sights.

But they weren’t talking. At least not with their mouths. When I got closer, I saw that they were communicating – in fact, they were talking non-stop…with their hands. Most of them stood in groups of two or three, their arms and hands and fingers darting here and there like tiny sparrows.

The majestic flight of unspoken words.

Then one of the adults in the group, also wearing a fluorescent orange shirt, clapped her hands twice before putting up her hands in what looked like the peace sign. Then she clapped again and held her hands up, again. Their hands fell reluctantly to their sides, mid-conversation, and their faces turning towards her. She said something with her hands, and everyone fell in line and left the fair. They teased each other on the way out, tripping each other as kids in a line often do. They laughed. They left.

There was something beautiful about their silence, something spiritual. But it wasn’t just the silence that was beautiful – it was the joy present in that vacuum of sound. It was strength found in weakness. It was their solidarity and friendship.

It was the perfect example of community.

3 Replies to “The Perfect Example of Community”