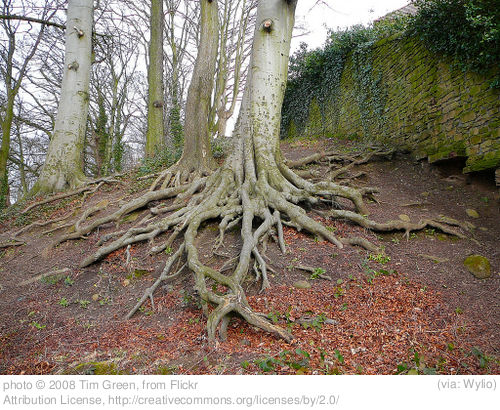 I somehow thought that digging around the roots of my family tree would lead to answers. I assumed that the things I learned about my ancestors would be like the final pieces to a puzzle.

“Ah, so that’s why I bite my fingernails.”

“I knew there was someone to blame for my two cow licks and tendency to sprain my ankles.”

“Imagine that – my great-great grandfather loved to write.”

But with every unearthed answer came a new root system leading to a different part of the yard. More questions. More unknowns.

For example, my grandfather used to disappear, sometimes for an entire day. “Dad’s gone,” grandma would say, matter-of-fact, as if she had actually just said, “The milk’s run out,” or “We need more eggs.” Depression resulting from numerous failed businesses sent him on a quest for solace, found only in solitude. One night they discovered him in the middle of a field, just walking.

And I wonder, where in me does that reside, that possibility for depression, that longing for solitude, as if all the great pressures of the world can be relieved by escaping them?

My great-great grandfather lost four brothers and sisters before he was 16, mostly to disease. His first wife died when he was in his twenties. Two children that he had with his second wife died at a young age. Yet his journals reflect strength, determination, and near indifference to the pain of this world.

“Watch where you walk in this world,” he wrote in his journal. Does that same strength lie dormant in me, ready to well up when life becomes too difficult?

Does that bravery live somewhere inside of me? Do I have the right to call on it?

There are some roots too deep to follow, impossible to exhume now that so much time has passed: rumors of a great-great aunt whose mental illness led to her parents locking her in her room; hints at suicides never spoken of openly; rebellious children whose wild years brought shame on a family.

I look up. My own branch is just beginning to bud. But only because of these roots, reaching down, impossibly deep. Who knows what other parts of me I will find?