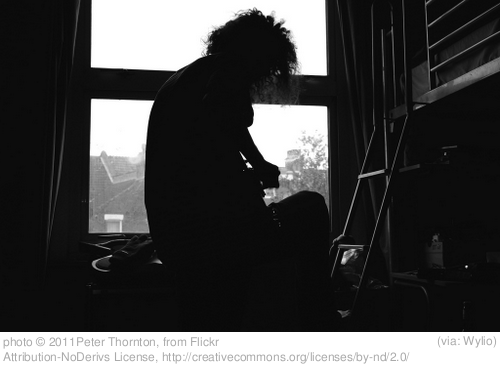 These days, the first thing I look for when our church’s band starts playing on Sunday morning is who’s on electric guitar. In the last six months or so we picked up one of the most passionate electric guitarists I’ve ever seen.

His name is Nicholas. He’s about five feet tall. He’s got fast fingers and he rocks while he’s playing, as if the music has literally taken over, as if his soul has opened up and turned into one beautiful chord.

Did I mention that Nicholas has Down’s Syndrome?

He knows his guitar isn’t turned up, but that doesn’t stop him from playing. Or bending over and adjusting his amp. Or pausing in between songs to tune the strings. From where I’m sitting, it looks like he’s hitting every note, jamming with the best of them. He’ll give it the old windmill at the rocky parts, and he’ll slow down to a more sedate rhythm when the music demands it.

Most of all, you can tell he loves it – being up there, being part of the band, worshiping, performing. All of it. And he’s not going to let one small detail – the fact that his guitar isn’t turned all the way up – stop him.

I have a lot to learn from Nick.

When other bloggers’ posts are sounding more melodic than mine, do I let jealousy and dissatisfaction invade my spirit, or do I keep playing?

When other authors have books that seem to be taking center stage for a time, do I take my unplugged guitar and stomp off the stage?

There’s something about the way Nicholas plays guitar that reminds me of how I should write, how I should live my life.

9 Replies to “The Best Guitarist in the World”