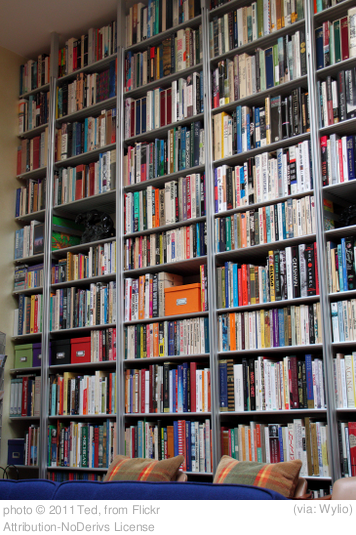 I have an obsession with my bookshelves.

Sometimes I will just stand there, staring at my books, and this feeling of fondness rises up in me, not unlike the way I feel when I sneak into my kids’ rooms at night and watch them sleep. Staring down at my children I marvel at how they are kept alive by such a small passageway, and that this invisible air slips in and out and kindles the life in them.

I think the same thing when I look at my books – such small breaths by people I will never meet, and yet they managed to exhale things like “East of Eden” or “A Prayer For Owen Meany.” Such monumental ventilation.

I pull random books and stare at the covers, remember when I first read them, how they impacted me. Like old friends.

Read that one as a freshman at Messiah College, eyes wide open, taking in the world. Like a satellite that ventures outside of the Solar System, I was amazed at the breadth and depth of the universe outside of Lancaster County, where I grew up.

I just try to warn people who hope to get published that publication is not all that it is cracked up to be. But writing is. Writing has so much to give, so much to teach, so many surprises.

Thank you Anne Lamott. The inscription inside the front cover reads, “To Shawn: For his 21st Birthday. From: Jason McCarty.” One of the best gifts I ever received.

And for us this is the end of all the stories, and we can most truly say that they all lived happily ever after. But for them it was only the beginning of the real story. All their life in this world and all their adventures in Narnia had only been the cover and the title page: now at last they were beginning Chapter One of the Great Story, which no one on earth has read: which goes on for ever: in which every chapter is better than the one before.

My wife is not sure what to do with that last passage, because, while she also loves the imagery, it is a story that makes me eager to die.

My bookshelves also lend me a semblance of control. I like to place at least one of Anne Lamott’s books right beside Dobson’s book “Bringing Up Boys.” I like this. It makes me smile.

I’ve thought about putting “Imaginary Jesus,” “Evolving in Monkeytown,” “Blue Like Jazz,” and “Love Wins” together, because I think Mikalatos, Evans, Miller and Bell would make for one of the best dinner parties ever.

What are your favorite books? Your favorite quotes? What does the way you arrange your books have to say about you?

21 Replies to “Exhaling Words: An Obsession With Books”