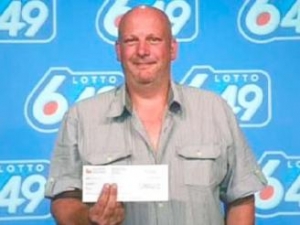 Tuesday’s Top Ten has kind of fallen by the wayside. Not sure why.  Maybe I need some suggestions on some good things to make top 10 lists about.

Anyway, just this Wednesday I’m doing a Wednesday’s Worst: the worst ten things about winning the lottery (I may or may not have stolen this idea from The House Studio).  Here we go (and these have all happened in real life, not just on this blog):

#1 – You could get shot and killed by your sister-in-law while she and her boyfriend are trying to kidnap you and hold you for ransom.

#2 – The photo of you holding that giant check could remind police that someone looking very much like you is wanted for theft and possession of stolen property.  You could then be arrested and incarcerated.

#3 – You could win the lottery twice, lose all the money, and end up living in a trailer (heck, I did this without winning two lotteries – I just became a writer).

#4 – You could string your money together and see how many times it wraps around the world, only to get kidnapped by real live pirates

#5 – You could get sued by your girlfriend for a share of the winnings and have to pay out, and then your brother could hire a hit man to try to kill you hoping to inherit some winnings.  Within one year you could (theoretically) be $1 million in debt and file for bankruptcy, leading to you living on food stamps and a $450-per-month stipend.

#6 – You could blow all your money on cocaine.

#7 – You could go to the Canary Islands, get married and buy a house, spending so much of the money that you end up taking a job at McDonald’s to cover your living expenses.

#8 – You could drown in your Scrooge McDuck style money bin

#9 – Your husband could win the lottery and never tell you, then vanish once you were on to him.

#10 – You could trip on the ginormous check while exiting the stage, fall down three steps and paralyze yourself.  You could then fall in love with a nurse in the hospital, get married and flee the country to avoid paying the hospital bills which weren’t covered by your insurance because you quit your job the minute you found out about the lottery win

California has a handbook for lottery winners. It doesn’t sound like anyone is reading it.

Okay, so three of those listed above never happened – can you figure out which ones I made up?

And what do you think is the worst thing that could happen after winning the lottery?