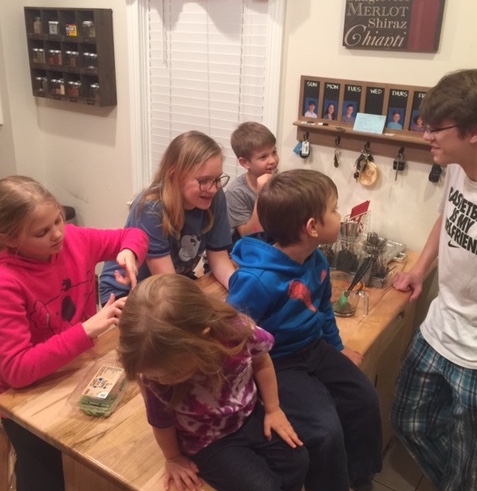 The sun shone beautifully, and it was only February, so we opened the windows and smelled the almost-spring and the end-of-winter and the first blue sky in a week. I had been in a fog this January. I felt like I had woken up in the middle of a lucid dream, and I couldn’t get my bearings in this new, dreary world. The gray skies were dragging me down. The long dark crept around the house, whispering to me.

Then came this February day, offering sun and fresh air and melting snow.

My older daughter scooped up her purse and a light jacket and proclaimed she was going to walk the city, take photographs, maybe visit Central Market and buy herself a smoothie. She walked outside, onto the sidewalk, and I remembered that feeling, that sense of invincibility, when all the world was there for me.

Later in the day I walked home with our two middle-aged kids. I walked in the front and they came along behind, straggling ducklings, and I heard them talk about friends and people they knew and stories they’d read.

I’ve been feeling the passing of time in sharp ways recently. The years keep turning, page after page. The height marks of our children creep ever upward on the laundry door. I am 42, and Maile and I will be married for 20 years in August. What is a life, besides years that speed by, and months that come and go, and days that last a moment?

Now, the street is dark. Leo stares up at me through his bedroom door, sucking on his finger, his large brown eyes heavy with sleep. I can hear some of the other kids in other parts of the house—Cade reading downstairs, Lucy in the bathroom, Sam sleeping on the floor because he never wants to sleep in his room. Abra pops her head around the door and asks to be woken up earlier than usual. Poppy calls out for “Mama!”

February is here now and even though more snow is coming, I can believe in spring again.