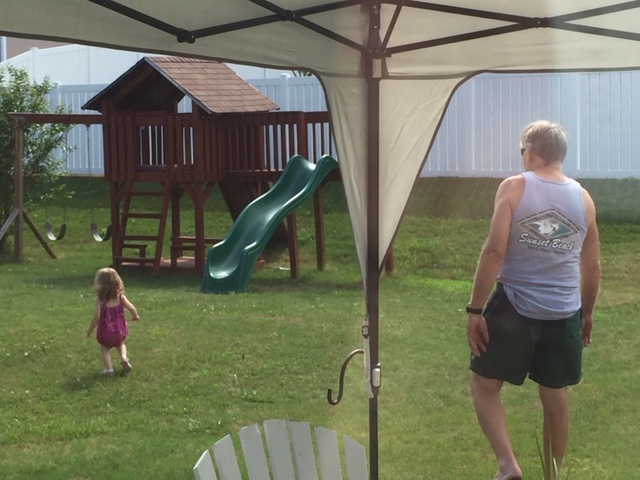 Her grandfather walks quietly behind, hands at his side, staring at the grass and then at the fruit trees he planted and then at his granddaughter climbing the slide.

“Yep,” she says, because that is her answer to almost everything these days. Yep. She doesn’t have time for much else. She’s always on her way to the next thing.

So he stands there and watches her climb, this grandfather of hers. He is 70 years older than her. Think about that for a moment. 70 years. Seven decades. Seven long and large chunks of ten years each. He lived his own childhood, his own growing up years, lived with and left his own siblings, his own house. He came of age, got a job, married, had kids. Had a career. Lived through the death of friends and family members. Had his own tragedies, personal and public. Lost his own grandfather, his own father and mother. And now there he is, 72 years old, standing in the back yard of his North Carolina house, watching his granddaughter climb a slide. She loses her grip and slides down part of the way. Climbs back up.

She has all of those things ahead of her, the growing up and the leaving and the figuring things out, the birth and death of friends and family, the triumphs, the times that will make her weep with joy or sadness. But right now she is thinking only of the slide she is trying to climb, and the sky above her, and the heat that holds her. She is the center of the universe.

I watch them through the glass door, thinking of my own grandfathers, both of whom died before I was of the age when I could appreciate them fully. Both of them had lived lifetimes, and our paths crossed for such a short time, and I stare out the glass thinking of how our paths are always crossing, lifetimes between us. The old getting older, the young never catching up but old before they know it, looking down at brand new babies and wondering where all the time has gone.

I wonder that now myself. Often. Where has all the time gone?

“You can do it, Poppy,” he says again, and she turns at the top, and she smiles, and she lets go.