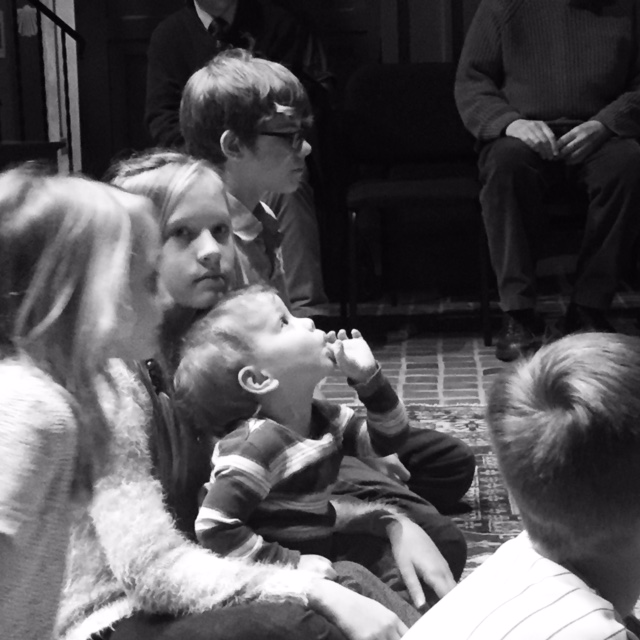 I’ve never been to an Ash Wednesday service before. This is just our second Lenten season at Saint James Episcopal Church, and last year we couldn’t make it to the Wednesday service, so when we headed downtown yesterday, I wasn’t exactly sure what to expect.

“Stop being so happy,” I told the kids as we walked towards the church. “This is not a joyful service. They put ashes on your head. It’s basically death.”

The kids stared at me as if I’d lost my mind.

I didn’t have anything to be afraid of, though. Reverend Lauren was as kind and gracious as ever, and she welcomed all the children to sit on the carpet up on stage, at the front of the church. She brought out various elements – water, light, oil, and ash – and explained their significance. After she explained the meaning behind Ash Wednesday, she walked around to each of the children and made the sign of the cross on their forehead with the ash.

“Remember you are made of dust, and to dust you will return.”

It was a somber service, yes, but there was a depth to it, a heaviness of spirit that somehow seemed right. I closed my eyes as Reverend Lauren put the ashes on my forehead, and, oh, how human I felt. Suddenly, the shortness of my life was on display for me to see, lasting no longer than the time it took her to mark me. I looked around at my fellow congregants and there was something obscene about the mark, as if I was seeing them naked. But there was also something beautiful about it, as if we had all finally admitted something very important, and now we could move forward.

I opened my eyes, my soul stunned. I glanced over and watched as she did the same to Leo, and I had to fight back the tears. It is one thing to acknowledge your own mortality, but quite another to be reminded that your one-year-old, with his new breath and his innocent eyes, is also marked. He will someday return to dust.

“Remember you are made of dust, and to dust you will return.”

I’ve been thinking a lot about what to give up or take on during Lent this year, and for the last few days one word has been projected into my mind: “Listen.” I haven’t been exactly sure what to think of this.

Then came the recent, trendy firestorms. Cam Newton, the black quarterback for the Carolina Panthers, and all the criticism surrounding him. Beyonce’s new video, Formation, and the backlash against it from many of my white friends. So many issues involving people of color, and so many smug, dismissive, insulting white voices.

Friends, during Lent, I commit to actively listening to my friends who are people of color. Will you join me in this? I say actively because I AM GOING TO SEEK THEM OUT AND ASK THEM TO TALK. My Facebook and Twitter friends. Eric, from across the street. Shayna, my wonderful new friend at Saint James.

Most of us have very deep, foundational reasons for feeling the way we do about certain things. Maybe it’s because of where we grew up, or who we grew up around, or what we’ve seen in the world. Maybe it’s what we were taught, or what we experienced, or what we believe. But other people have seen other things, and if we can stop shouting past each other, if we can stop and listen…I don’t know. It seems the right place to start.

Will you join me in dedicating this Lenten season to listening?

We got home, and we ate dinner, and the kids were playing around the house. I walked into the bathroom, and I caught my reflection in the mirror. The black mark on my forehead shocked me. I had forgotten about it. Instinctively, I reached up to wipe it away. But then I left it there.

7 Replies to “My First Ash Wednesday Service, and a Suggested Lenten Practice For My White Friends”