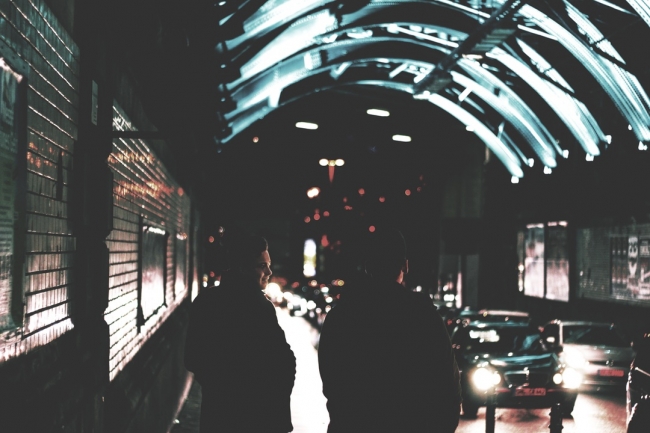 The four oldest kids and I bundle up and walk out the front door, on to the sidewalk that runs along James Street. It’s 5:45pm and January, which means it’s almost dark, the sun drowning in the buildings that line the western sky. And it’s cold – the wind whips through the intersection of Prince and James, and we wait at the corner for the light to change, and we all sort of gather closer together like penguins waiting out the darkest days.

“Look at the moon!” Lucy says, and it’s there, barely visible, a thin, rounded silver thread. We follow it as if it is a guiding star, all the way to the Y.

Inside, the girl at the desk smiles and welcomes us and my glasses fog up because of the humidity from the pool and we walk up a long flight of steps to the second-floor gym. The three younger kids are absorbed in a cloud of children for an hour of Fit Kids fun, while Cade goes to the other half of the gym for basketball practice. Older neighborhood teenagers hang around the margins, waiting for an extra moment when they can shoot some hoops before being shooed off the court.

One of the teenagers – a tall, tough-looking kid – grabs Cade’s basketball from where he left it under the bleachers. Cade doesn’t need it during practice, since they use the basketballs from the Y. The tall, tough kid dribbles the ball during Cade’s practice. I have to admit: I’m a little worried he might walk off with it. We’ve already lost a few things here in the city. I’m trying to be smarter about this without going all paranoid.

Cade’s practice ends and the kids fun time is over and the gym erupts in chaos between the classes. We gather our coats and walk towards the door. I walk over to the tall, tough-looking kid who has been playing with Cade’s ball.

“Hey, can I get that ball back? It’s my son’s.” I’m kind of expecting him to give me a hard time.

He stares at me for a moment, then smiles a kind smile and bounce-passes the ball to me.

“No problem, sir,” he says in a respectful voice. “Thank you.”

“Thanks,” I say, and we leave, the kids and I, back out into the dark and the cold and the short walk home.

But I can’t help think about the kid in the gym, the tough-looking kid I was worried about approaching. I’m a country boy, and I grew up fearing the city. With the five words he said to me, I could quickly tell he was a good kid. A kind kid.

He reminded me of another story, another instance here in the city, when the kids and I walked down the sidewalk on our way to the park. A group of teenagers emerged from a side alley and walked towards us. But they weren’t looking for trouble.

“Over here, kid!” the oldest one shouted to Sammy, motioning for him to throw him his football. Sammy glanced at me.

“Go on, go deep,” the kid said to Sammy, and again Sammy shrugged and this time he ran long, dashing down the sidewalk. The leader of this posse heaved a pass, and Sammy made an amazing over-the-shoulder grab.

“Whoa, boy!” the kid shouted to his friends, laughing and hitting them and generally making a big fuss over Sammy. “You see that kid? He can catch! Sweet grab, kid!”

Sammy, of course, grinned from ear to ear.

I only say this because this is the city you’re afraid of. These are the kids that make you nervous when you walk the streets.

One Reply to “This is the City You’re Afraid Of”