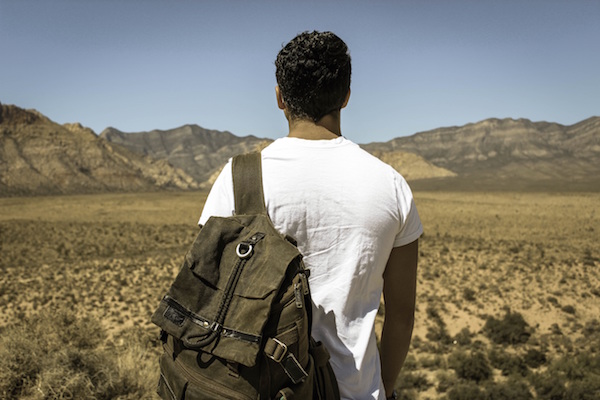 My 12-year-old son walks the delicate line between two worlds. He is all limbs and big smiles, growing into a frame that will easily exceed mine someday very soon. We recently bought the same style of shoes, the main difference being that his are a half-size bigger than mine. He is a golden retriever in personality and at his happiest when he is making other people smile.

The line he walks is the one between childhood and adulthood. His growing body is beginning to shout “young man!” while he plays in his room with Matchbox cars and reads Minecraft books.

I sometimes play monster with the kids, wrestle them all to the ground, but when I inadvertently grab his foot in the middle of that mass of arms and legs, I am shocked. Whose foot could this possibly be? How could I have a child who belongs to this appendage?

As a child, he plans on doing and becoming things that are nearly impossible. As a child, he sees no reason these things might not come to pass, as if the only thing he has to do is wish them in order to make them so. He announces these things in casual conversation, things like, “When I play in the NBA,” or, “You know, when I’m an astronaut…”

Biting my lip in these moments is perhaps one of the hardest things I’ve had to do as a parent because I want to remind him of the astronomical odds, the one-in-a-million. I want to warn him about the fragile nature of hope, the heaviness of failure.

But, no. Truth be told, I don’t want to just warn him. I want to forbid him. I want to tell him to stop being so childish, those things will never work out. I want to ask him, What else do you want to do? Surely there is something more reasonable, more practical, more attainable.

But why? a voice asks me. Why do you feel so compelled?

I’m protecting him, I reason. I don’t want him to be disappointed.

But why? the voice insists again, and this time I have to pause and think.

Because those poignant moments of failure are too hard.

When they happened to me, those palpable failures, they shook the very foundation of who I thought I was. They threw me off kilter, and for some time afterwards I felt like I was floating through space, no way to tell the difference between up and down.

Don’t set your sights too high, I want to tell him. That way, you won’t be disappointed.

But is that really the kind of existence I’d want any of my children to experience, a life without trying? Without wanting? Without desiring?

I think of where I am now, as a writer. I may never write a best-seller. I may never be famous for my creative ability (as I discussed in the Letter to My Friends Who Are Not Famous). What if my dad, when I was 12, honed in on my love of stories and pulled me aside.

“Listen,” he might have said, “This whole writing thing? You need to just walk away from it. Find a nice hobby you can’t fail at. Find a dependable job you’ll never lose. Writing? The odds are too small, son. You’ll be terribly disappointed someday.”

It’s hard to think of each of my children reaching a stage where the world tells them they’re not good enough. Maybe the best thing I can do isn’t to short-circuit that failure, but to help them realize where their true value lies: in who they are, and not in what they do.

4 Replies to “Can I Love My Children Enough to Let Them Fail?”