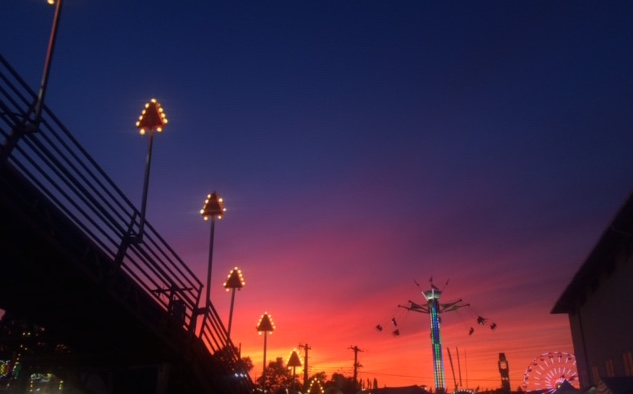 “Is there an older gentleman around here?” I asked. “A guy who smiles a lot?”

The ticket taker I had approached stopped and looked at me with a gentle smile on his face.

“Are you talking about Eddie White?” he asked.

“I don’t know his name, but he’s been here for decades,” I said. “Always a super nice guy. I haven’t seen him this week, and I’ve been meaning to ask about him.”

The man nodded again, tears in his eyes.

“He died two months ago.”

I stood there, amazed at how lives end without any regard for the living. One year someone is there, taking your pass at the fair, laughing and joking with you, and the next year they’re gone, vanished from the planet.

“I’m really sorry to hear about that,” I said, walking away.

There are ghosts at the Frederick Fair. I’ve seen them walk the grounds in the morning, when the midway is empty, the Ferris wheel still, the grandstand flags rustling quietly. I sit under the quiet tent and listen to them push against the canvas flaps. In the morning the ghosts are slow and sad and look like homeless people, or carnies who can’t figure out why they woke up so early. They wander around and slip through locked doors.

At night, the ghosts creep along the shadows – you might mistake them for a breath of cigarette smoke or misty strand of light. They look with glittering eyes out over the oblivious crowds. They nod quietly at you if you make eye contact, and then when you think you recognize them, when you look back to find them, they’re gone.

There is the ghost of old Pete, the man who used to take up the trash, the man who once told me about how the preacher lied at his father’s funeral, told everyone his father was a good man. “I never went back to church after that,” he said, shaking his head, pulling out a cigarette, the anger still fresh in his face. He told me about his time in the service, the Korean war, how he and his buddies would have died for each other.

“Preachers? They don’t know nothing about that,” he said, but then he’d glance over at my dad (who he knew was a preacher), and he’d smile an ornery smile. “I don’t include your pop in that,” he’d say, laughing his raucous smoker’s laugh. He’s gone now, but I still see his ghost from time to time on rainy nights, or maybe it’s someone who looks very much like him, picking up the trash. I wish he’d come over and talk to me again so I could give him a soda and listen to his stories.

Then there is the ghost of my grandfather. I see him in everything here: the tables he built that we still use, the old pieces of equipment he patched and fixed and tinkered with. I see him in every $5 bill, because those are the ones he slipped to me straight from the cash box with a gleam of mischief in his eye. I remember him when his old friend John stops by every year. John, a friend of my grandfather, and whenever he visits I look over my shoulder because surely my grandpa must be around here somewhere?

The living can have ghosts, too. Did you know that? Jim and Suzy – I think of them every night I’m closing up the tent, letting down the whispering canvas sides, because for years they were across the aisle from us selling popcorn. And there are the ghosts of all the people who’ve worked for us through the years, their laughter sneaking through the crowd of people. There’s the ghost of my grandmother who doesn’t make the trip out to the fair anymore. She used to stand beside the tall table and make sandwiches every day, pretty much all day, never complaining, her spirit so gentle. Now she mostly stays home.

Last night, in my hotel room by myself, I felt the ghosts even more powerfully than ever – the ghosts of my parents when they were younger. I remembered how, when I was little, we would come back to this very same hotel late at night and they would count that day’s cash, place it in stacks on the mattress, relief gracing their faces as they realized that, because of the fair money, they could replace a dying car (with another pretty dumpy car) or buy something they needed for the house or maybe just not be so tight that year. I remembered the ghost of their relief, the way it lifted something heavy from them.

On Sunday, this coming Sunday, my dad (my real dad – not his ghost) and I and a few friends will pack up every single thing under this 40′ by 40′ tent, cram into the same old trailer we always do, put everything into storage, and forget about the Frederick Fair for one more year. It will be like it never happened. Until next fall, that is, when the first cool, September night wakes me up, and I realize the ghosts are stirring. The ghost of the Frederick Fair.

And then we’ll come back, and we’ll walk among the ghosts again.

3 Replies to “When I Saw Ghosts at the Frederick Fair”