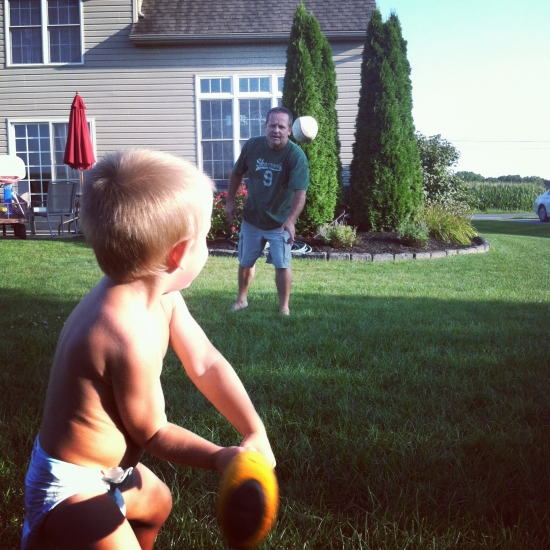 On a cool August day, on that particular stretch of Market Street (which is more like an alley than a street), just north of James, you might see the young woman with the empty eyes sitting on the stoop, smoking a cigarette. Maybe you will, maybe you won’t – I’ve seen her there many times, staring at the cracks in the sidewalk. The top half of the storm door behind her is missing the glass.

If she’s sitting there and it’s in the afternoon or on a weekend you’ll probably also see her daughter playing with the dust and the pebbles that have been pushed into the gutter, her own private sandbox. She’s tiny and blonde and has dirt smudges on her face. Her clothes are covered in dust. She makes lines with a discarded straw.

If you walk past them and keep going north on Market, you’ll realize there aren’t any houses on that particular stretch, not between James and Frederick streets – there’s only chain link and tall, brick warehouses and a few long lines of storage units that some people use as a garage for their car and other people use as porches, sitting in front of the open doors, the grill on, their kids riding old trikes around in circles.

But some days, if the sun is out and you listen, you’ll hear a rhythmic !thwop! followed by a small shout, a particular time of silence, and then another !thwop!. If you follow that sound down the alley off of Market Street, you’ll see a narrow swathe of grass beside a brick warehouse that’s being renovated into “high-end apartments.” The grassy stretch is bumpy and littered with bricks from the building and old stones no one has touched for years. Overgrown bushes separate that grassy alley from the backyards of the houses on Prince Street. Cats weave in and out of the shadows.

There it is again. Look closer. It’s a long-haired boy wearing a baseball cap and cleats that are a touch too small. He’s six years old and he throws the ball to his dad (me). His dad throws the ball back. The red seams spin in the air like the rings of a planet and the ball smacks into the leather gloves. When I reach my own arm back and throw there is muscle memory there that goes back thirty years, goes all the way back to a small boy on a farm throwing ball with his dad in 1985, back to a large, lush, green yard shaded by two tall oak trees. Beyond that yard, fields stretching out. A small brick church across the thread-thin back road. A cemetery with its broken-teeth stones. A bending creek with fairy tales on the far bank.

But life has its own beautiful rhythm, it’s own poignant meanderings, and we resist our life’s natural course at our own peril. When we cling to our present situations, we do so at the risk of an unimaginably beautiful future.

Let go of comfort. Take a right on Market Street. Stop and talk to the empty-eyed woman. Give a smile and a kind word to the small child playing in the gutter. You might just find an unexpected rhythm, or, even more unlikely, a green strip of grass in the middle of a city perfect for playing catch.