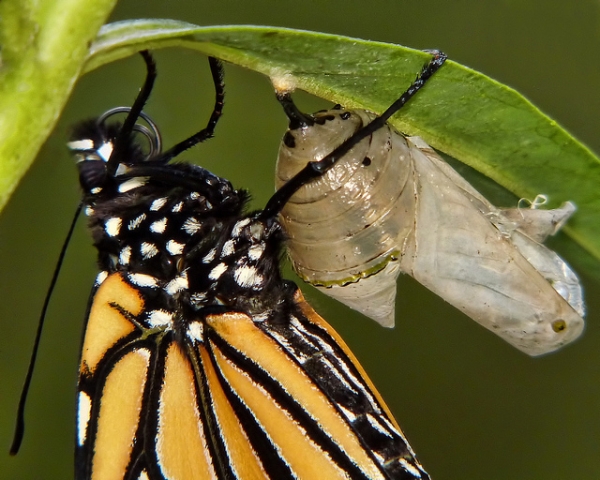 And just when I’m struggling with this in-between phase of life, images fall around me like raindrops.

Maile shared this beautiful one with me the other morning:

“Are caterpillars told of their impending resurrection? How in dying they will be transformed from poor earth-crawlers into creatures of the air, with exquisitely painted wings? If told, do they believe? Is it conceivable to them that so constricted an existence as theirs should burgeon into so gay and lightsome a one as a butterfly’s? I imagine the wise old caterpillars shaking their heads – no, it can’t be; it’s a fantasy, self-deception, a dream. Similarly, our wise ones. Yet in the limbo between living and dying, as the night clocks tick remorselessly on, and the black sky implacably shows not one single streak or scratch of gray, I hear those words: I am the resurrection and the life, and fell myself to be carried along on a great tide of joy and peace.”

I was sitting at my desk when I read that one. I stared at the book for a few extra moments. Outside my window, the sounds of the city. Normal sounds. Mundane sounds. Certainly nothing that would herald the kind of transformation Muggeridge is talking about here.

If told, do they believe?

If told, do they believe?

I believe. Help my unbelief.

3 Replies to “Can You Believe You Will Not Crawl Away From This, But Fly?”