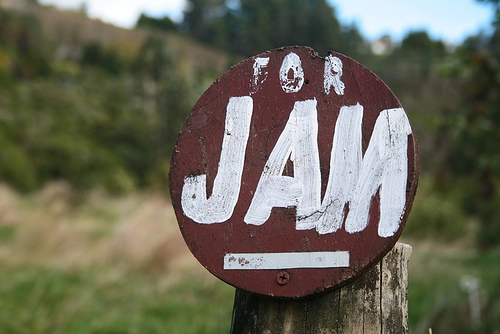 Today’s post comes to you from Alice Chaffins, a wonderful person, writer, and friend. I am happy she can fill in here during my week away from the blog. Enjoy.

The tools and ingredients were laid out on my counter. Gram’s potato masher, our biggest stock pot, sugar, pectin, and loads of fresh blueberries. We had picked 22 pounds of blueberries the night before and I couldn’t make and eat enough cobblers or pies or cakes to use all of those berries. And while I don’t consider myself a particularly good cook, jam isn’t terribly complicated to make, and I’ve made it before with some success, so I thought that would be the best way to use a portion of our harvest.

I carefully mashed, measured, boiled, and added the ingredients together. I watched the mashed berries morph from an unappetizing brownish goo into a beautiful dark indigo sauce. It smelled amazing, but as I added the pectin and sugar, it didn’t seem to thicken. I ladled it into the jars that I had prepared and hoped that it would begin to congeal as it cooled, but a few hours later, it still looked far too runny to be considered jam.

As the afternoon went by and I could see that what I made wasn’t setting, I went online to see if there was a way to save reluctant jam. One site to let it stand for 24-48 hours to make sure that the pectin had plenty of time to activate. Before the directions on how to remake the jam, the author also said that it was okay to adjust your expectations. Maybe call it preserves or syrup instead and let the ingredients be what they would rather than trying to make them something else.

So I gave it time. I waited for the jam to thicken on its own. After 48 hours, I dumped the contents of the jars back into my pot and tried again. Once again, I followed the directions at the site, adding more pectin and letting it boil well past when I thought it might start to scorch the berries. I ladled it back into new jars, but once again, I had a feeling that this jam was not meant to be. Hours later it was clear – this was a failed experiment.

I’m not sure what went wrong. Maybe I miscounted the cups of sugar that I added. Maybe it was a bad batch of pectin. Maybe I tried to make too much jam at once. Whatever the issue, this particular combination of berries, sugar, and pectin was not cooperating and doing what I was asking. Instead of jam, I have 7 jars of really delicious fruit topping for ice cream.

Sometimes there are failures. The book doesn’t sell. The illness doesn’t abate. The prodigal child doesn’t return home. For all of our efforts, we don’t get the desired results. It can be disheartening. Sometimes it damn near crushes us.

When I failed at my first marriage, I just wanted to crawl into a corner and stop. I thought I had done everything right, but in the end, I was an adulterer. I was a liar. I was a bad wife, a bad mother, a bad person. I was tempted to define myself solely in terms of that failure.

I don’t know what to tell you about your failures. Maybe you need to keep going. Keep working, keep hoping, keep persevering.

But maybe you need to accept the failure. See what lessons you can learn, what tidbits you can save, and let the rest go. Adjust our expectations for what is acceptable and move forward.

To check out more of Alice’s work, please click HERE.