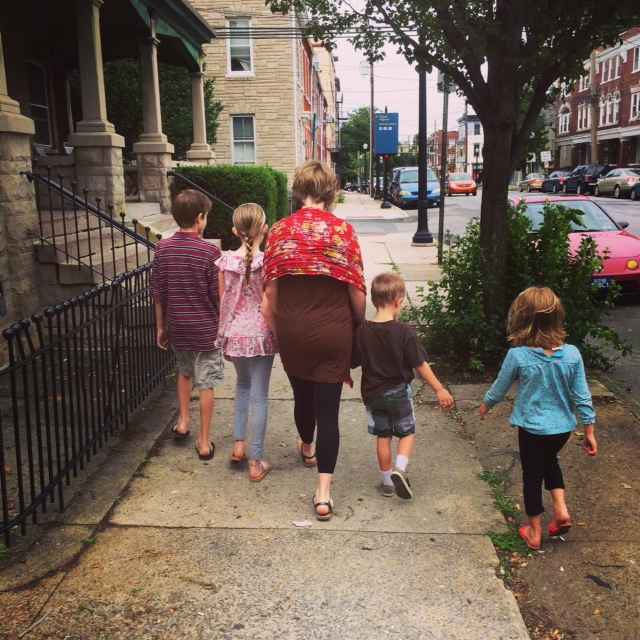 Saturday nights on James Street can be a bit lively.

This weekend we were in bed and it was just about midnight when we heard a long SCREEEEEEECH followed by a loud BANG! Accident. The sirens wailed into action, screaming into the neighborhood. My sister sent me a text from where she works at a sports bar down the street.

ARE YOU AWAKE? JUST WONDERING WHAT IS GOING ON AT THE CORNER OF YOUR ROAD AND PRINCE ST! THERE’S A FIRE TRUCK AND A BUNCH OF COP CARS.

I told her there was an accident and soon fell back to sleep. Then, around 2am I heard a loud explosion from the neighboring street, loud enough that the sound wave it made set off a few car alarms. It sounded like an electric transformer exploded, but we never got an official word on that one.

We must be turning into city slickers though, because this time none of the kids came running into our room. They slept right through it.

Earlier on Saturday the six of us walked to St. James Episcopal Church on the corner of Duke and Orange. It’s a truly breathtaking church, and the services are nothing like what this kid, raised in the Evangelical world, is used to, but I’ve found it to be a refreshing change. At Saturday evening mass they sprinkle in the songs of a secular musician, a different one each week, and this week’s was James Taylor.

Even the old folks never knew why they call it like they do.
I was wondering since the age of two, down on Copperline.

After the opening song our four kids went out to spend time with the other children in the garden where they do their children’s class, tending the plants that will later be given to families in need or used for the daily breakfast the church serves to the homeless community. While they were out, the readings were given, the first from Genesis 28, and this sentence stuck out to me:

And God heard the voice of the boy…

Turn to me and have mercy upon me;
Give your strength to your servant;
and save the child of your handmaid.

What a promise that is. We’ve all felt that union with Christ in his death – we’ve seen loved ones fade under illness; we’ve walked with friends who lose more than they ever thought they could survive losing; we’ve felt the heavy weight of it all. But to be united with Christ in not just his death but also his resurrection?

Sometimes that seems too good to be true. 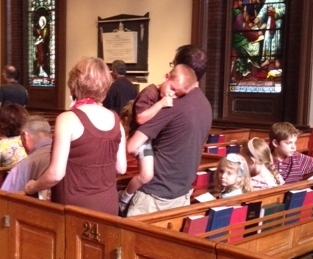 After the service, a man came up to me and said he couldn’t resist taking a photo of Sammy, nearly asleep on my shoulder (the other three children apparently looking for an escape) as we prepared to take communion. He asked if I would like him to text me a copy before he deleted it.

I said of course, and then we prepared to take the bread and the wine. The body and the blood. The death.

Here is the picture of Sam and I, just before the six of us walked home through a beautiful summer evening, the words of the post-communion prayer still ringing in my ears:

…send us now into the world in peace, and grant us strength and courage to love and serve you with gladness and singleness of heart; through Christ our Lord.

And of course the lingering memory of those James Taylor songs took us home as well.

I’ve seen fire and I’ve seen rain
I’ve seen sunny days that I thought would never end.
I’ve seen lonely times when I could not find a friend.
But I always thought that I’d see you again