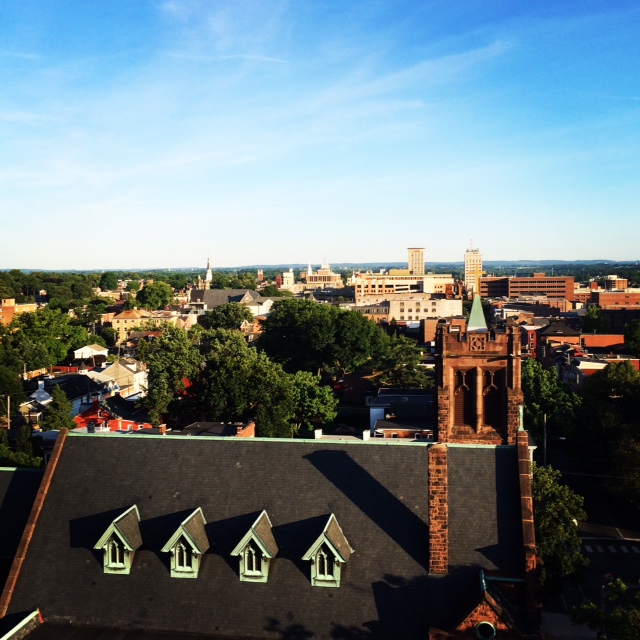 I crossed the street in front of a white van that pulled up to the curb. Two men got out and stared at me for a moment, but I walked away. When I looked back, they were marching up to a house across the street from ours, a three-story brick row home that at some point in the last fifty years had been turned into apartments. The one man was dressed like a sheriff, and the other wore jeans, the word CONSTABLE in white letters on the back of his navy blue t-shirt.

When I got back to my house a few minutes later, my neighbor, a man in his 70s who has lived here for nearly 30 years, said hello.

“They got their man,” he said, nodding towards the other side of the street. The white van was gone.

A few days ago we walked out on to the top floor of the parking garage and the sky spread out all around us and we were kings and queens, looking out over the realm. When we got to the edge, my stomach did a little flip and I held on to the rail. Ten floors doesn’t look like all that much from the ground, but when you’re standing there, contemplating the distance between you and the end of you, it’s a fair ways down.

I never realized this city is so green, but from up there it looked like a forest with buildings growing out of it, steeples everywhere and the flat tops of brick and cement buildings marching away from us. The sky was a white-washed blue stretching out to distant hills, remote and wild. The kids ran off and played tag while we stood there and pointed out the places we knew.

It’s a strange experience, looking down on your own city like you’re looking into a snow globe just before giving it a shake.

We walked home from the parking garage and turned on to our street. James Street. It was evening and the sky was turning gray and a few of the street lights thought about turning on and the temperature was that late spring perfection. We walked past the old Steak Out that’s now being renovated into a Greek restaurant. Paper covered its windows, and painter’s tape lined the fresh white and blue pattern on the brick. We walked past the small parking lot and up to the first row of houses, the ones before ours that have little porches jutting out into a narrow sidewalk. The sidewalk is so narrow in that spot that if someone is sitting on their porch you can just about smell their breath when you walk by.

A group of six or seven men hung out around one of the porches, their group blocking the sidewalk. Two of the men were old and sitting on folding chairs. The rest were young men, antsy, looking for something to do. They were all African-American, and this is where I tell you exactly how I feel in this city. It’s a strange thing, being a minority, walking the streets and feeling like the odd person out. It gives you a new perspective on life, a new view of how others feel in other circumstances, in other places. When you’re the only person with white skin all kinds of questions pop into your mind.

Do they wish I wasn’t here?

Do they think I’m a racist?

Do they not like me, because of my skin color?

My family and I approached the group of men blocking the sidewalk close to our house and at the last second I decided I was going to stick with the strategy I’ve adopted since we moved into the city: make eye contact with anyone who is willing, and say hello. No matter how intimidating this group seemed. No matter how grouchy the two old men looked; no matter how the young men made me feel.

“Hi,” I said, looking up at a few of the guys, and they parted as we went through. At first it was all stares and silence. They stopped talking while we walked through. Then one of the older men, a man with jowls and wrinkles around his eyes and white stubble for hair, smiled, and his smile was like water.

“You have a good night, now,” he said, his voice music.

“Thanks. You, too,” Maile said, smiling. Abra waved, then dashed behind me and hid. Lucy grew bashful.

And then, one of the younger men, one with a handkerchief tied on to his head, a young man with tattoos and a sort of natural scowl, glanced down at my four kids trailing behind me like ducklings, took in my wife’s belly holding baby number five, and that toughest man of the group smiled and nearly laughed.

“Happy Father’s Day, man,” he said, shaking his head and giving out a loud “Whew!” while taking in the small crowd that is our family. All the other guys laughed, and I laughed with them.

“Thanks, man,” I said, and I felt this shock race through me, a shock that came from the realization that we are not different, this man and me. We are the same, no matter how we dress or talk or carry ourselves. No matter our skin color or talents or upbringing.

Sometimes it will almost bring you to tears, the kindness of strangers, and especially when you feel like the strangest one.

11 Replies to “Making Eye Contact With the Toughest One in the Group, and What He Said”