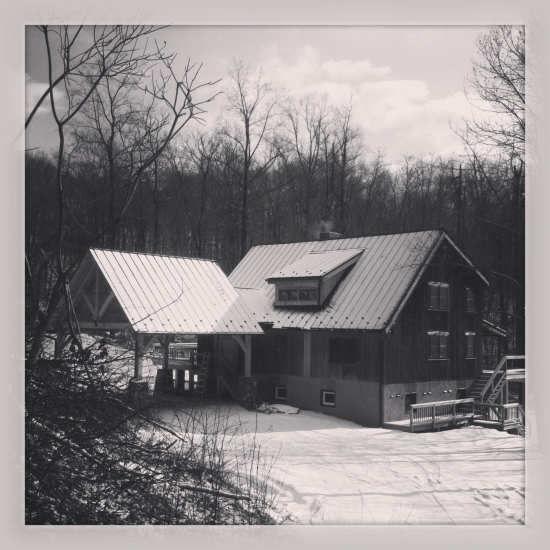 In a few weeks we will pack up our current house – my uncle’s beautiful cabin on forty acres of woods in southern Lancaster County – and move into the city. We’ll trade a patch of green grass and a place where Sam runs outside whenever he wants for a small backyard and an endless stream of pleas for him to stop going outside on his own. We’ll trade the noise of insects and morning birds for that of cars driving past and sledgehammers dismantling the building out back. We’ll trade a window that looks out into a tangle of branches for a window that looks out into a tangle of streets and alleys.

Our sixteen months in the wilderness has been a wonderful time for us as a family. We’ve bonded, learned how to depend on each other, and learned to trust one another. We’ve been snowed in and without electric multiple times. I’ve had to clear trees off the lane, and there were many nights when Maile and I lay in bed listening to the rain and wind pound the roof.

It was a beautiful time.

But I can’t wait to move, because it was also very isolating, living out in the boonies, and our season of isolation is over. Of course we weren’t completely isolated, but when we were home, it was just the six of us. Now, when we are home, it will be the six of us plus Miss Joyce next door and Anthony next door and a nice couple a few houses down and two young ladies we know just around the corner and my Aunt Kate two blocks away. It will be me stopping to talk to the people emerging from the barber shop and the tattoo parlor across the street.

Our sixteen months in the wilderness have prepared us very well for community.

I often hear Christians argue that, if you’re a Christian, you really should live in the city because that’s where Jesus would be. That’s where we are needed the most. I understand that argument, but I also cannot abide people telling other people what they should and should not do. What’s “best.” There are seasons to everyone’s life, seasons when the country might call, seasons when the city reaches out to you, seasons for public school and private school and homeschooling. Seasons for taking a break from television, or church, or sugar. Seasons for living simply and seasons for enjoying the extravagance of life.

How often we mistakenly take a beautiful season we are in and try to force it on everyone around us. How little we know of the lives we try to shoehorn into our own particular pattern of living.

So in a few weeks we will move into the city, and I will write on our front porch (ala Ken Mueller), and I will watch the people that go by and talk to those who want to talk. We’ll get to know our neighbors and their pets and their children and I’ll take the kids to the park and the Y down the street and we’ll figure out what to do about church.

It’s a new season, a new adventure. I’ll be writing about it, so if you care to join us here, that would be great.

30 Replies to “Our Next Adventure”