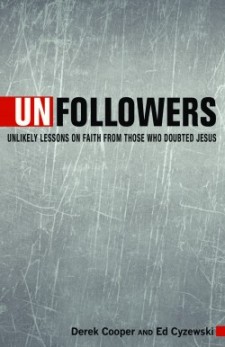 Today I’m talking with Ed Cyzewski about his newly released book, Unfollowers. Ed is a wonderful writer and someone who cares deeply about the scriptures and following Jesus. Read our interview here, and leave a comment for your chance to win a free copy. I’ll choose one lucky winner later this week.

It’s hard to find something new to say about Jesus. I wanted to give readers a perspective on the Gospels that wasn’t merely a remix of existing books. The unfollowers provided that new angle into these stories I’d been looking for.

If you read the Gospels from the perspective of what the “unfollowers” expected, the message of Jesus and the decisions of his disciples come into a much sharper focus. I’ve spent most of my life assuming that I would have jumped to follow Jesus. When I started relating to the stories of the unfollowers, I saw that I have just as many obstacles to following Jesus today. Their stories became a fascinating point of entry into the story of Jesus, and they helped me develop new-found appreciation for Jesus and his message.

I was studying the Gospels in seminary, and one day I finally understood the perspective of the Pharisees. They were just trying to be faithful to the teachings of scripture. I could really relate to them. I saw how Jesus didn’t compute for them. Worst of all, I saw that I had a lot in common with them.

I too separated myself from “notorious sinners” in order to keep myself holy.

I too condemned those who disagreed with my theology.

They couldn’t stand the redemptive approach Jesus took with sinners and how flexible he was about what his followers believed. I mean, the guy had a tax collector and revolutionary hanging out in the same pack! No wonder he alienated everyone.

Which one of your favorite authors (living or dead) would you like to read Unfollowers and why?

Well, if we’re talking about the New Testament, I’ve gotta choose NT Wright. I would especially want him to write a review of the book that says my book offers a “fresh” perspective on Jesus because he uses that word all of the time. I would also want him to call me up on my cell phone and tell me that it’s “brilliant” in his authoritative British accent.

Do you have a favorite Unfollower in the Bible? Who is it and what about them appeals to you?

The worst villains are also the most compelling to me. For instance, I could really relate to Judas and Caiaphas. They were both really practical guys who knew how to plan ahead and who tried to weigh their back up plans. Judas opted to betray Jesus when Jesus predicted his own death in Jerusalem, and while I can’t say that I relate to that, at the core of Judas was an assumption that God’s plans mirrored his own. When his plans for Jesus fell apart, he moved on to plan B very quickly. There’s a lot about Judas’ assumptions and planning that sound eerily familiar to me.

Caiaphas was so buried in pragmatic decisions and compromises that he hardly thought twice about killing this peasant preacher from a forgotten backwater. You can hear his exasperation through the pages of scripture as he calls his colleagues “fools” for not realizing they could just arrange to have Jesus killed before the Romans accused them of rebelling and came to crush the city. He had a small view of God and tremendous faith in his own ability to find solutions to his problems. Once again, that sounds eerily familiar to me.

How does this book compare to the other books you’ve written?

Coffeehouse Theology was my big picture take on how I approach theology as a conversation with the Spirit, scripture, and Christian community—you could say it laid out my methodology for studying scripture. Unfollowers is, in part, the fruit of that approach.

While Unfollowers is quite different from my other upcoming book The Good News of Revelation, it does share the same quality of trying to uncover overlooked perspectives on familiar parts of the Bible. Unfollowers takes on the stories behind the doubters of Jesus, while The Good News of Revelation shares how Revelation was a message of comfort and encouragement about the coming justice and restoration of God for persecuted Christians.

Also, in all honesty, it’s better. Ha! My co-author Derek Cooper did all of the heavy lifting with the researching and outlining, and that made it so much easier for me to focus on retelling the stories, while still asking tough questions at the end of each chapter.

But really, we divided the project into research and writing. Derek researched and outlined the chapters. He also added some application points of varying length. Sometimes I dumped his notes directly into the text and other times I wrote based on his research. I did the bulk of the writing, adding opening anecdotes, smoothing out the biblical stories, and filling in the application at the end of each chapter. Derek also reviewed everything I wrote, corrected my mistakes, and removed the most egregious puns.

Speaking frankly, without Derek, this book would not have been written. I kept telling him how great it was going to be and gave him vague outlines with half-baked summaries of Bible stories. I was stuck in the big picture. Derek literally combed through every Gospel story and categorized them so that we could pick a representative sampling of the various unfollower stories. Our editor at Wesleyan Publishing House cut one of my funny stories from the book so that we could fit that chart in the back (true story). It was a smart move!

Most major candies are broken down into Grape, Cherry, Orange, and Lemon. Which flavor is normally the last remaining flavor in your candy bowl?

Find out how to purchase Unfollowers HERE.

8 Replies to ““I Could Relate With Judas”: A Discussion With Ed Cyzewski Regarding His New Book, “Unfollowers””