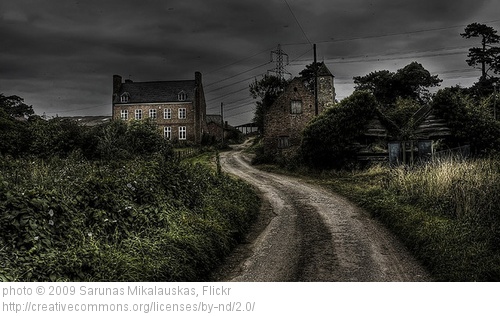 When I was a kid, the poorest person I knew was a boy named David. He was a big guy, strong and somewhat round. He lived on a farm close to me, and sometimes on summer days we’d race our bikes around the middle school, the one surrounded by country fields, the one so vacant in the summer it was hard to believe anyone actually attended there. Of course I never admitted to my friends during the school year that I hung out with David in the summer. When I saw him in the hall I usually found something else to look at.

I doubt he ever went hungry – he wasn’t that poor – but there was a cloud of lack that clung to him. Even in the morning, when his face was flushed from taking a hot shower, he still smelled like the barn. His dress clothes consisted of flannel shirts tucked into frayed jeans. I don’t think he ever owned a pair of sneakers – work boots did the trick, at school and on the farm. He never played on any sports teams, though he was certainly strong enough. From the little interaction we had, it seemed like he was needed at home.

The clearest memory I have of David was the day he came to my house and we got into a fight. I don’t know what led up to it, but I said some mean things to him and he wrestled me to the ground. That was sort of the story of my existence as a boy: my childhood strength was never physically overwhelming, so I often resorted to words instead of punches. Which once in a great while led to being on the receiving end of punches. Real ones. It wasn’t a great strategy.

What I remember most about that fight is big David sitting on top of me, the warm summer grass under my back. I was pinned, and I couldn’t move my arms. He was furious, his naturally red cheeks even more flushed than usual, his eyes letting off sparks.

But he just sat there, staring at me, trying to decide what to do. He didn’t hit me. To this day I’m not sure why not. I certainly deserved it.

There’s been a lot of talk during the last week about poverty. A lot of internet back-and-forth. To be honest, I haven’t read any of the articles or blog posts yet, although I’m sure I’ll cave at some point. It’s just that the endless sparring leaves me tired and wondering.

But all of this talk about poverty and wealth brought David to my mind. It’s all rather humiliating, thinking back to how I treated him. I was so concerned with self-preservation – you know, that thing so many of us clung to during junior high and high school. What can I do to get in, and, once I’m in, what do I have to do to stay there?

The point, though, is that when I was in middle school I didn’t know how to deal with poverty – financial, relational, or otherwise. I saw it, even at that young age, and I recognized it, but I just didn’t know what to do.

So I looked away. Which is what so many of us are still doing when it comes to poverty. We recognize it. We know it’s there. But we’re not sure what to do about it other than feel guilty, so we avert our gaze to the other side of the hall, or desperately search for a friend so that we can pass poverty by.

I just can’t help but believe that our lack of understanding, our lack of concern, won’t somehow end up with one side of our culture on its back, staring up into a justifiably angry face. A face that’s tired of being ignored. Overlooked. Treated like second class. A face that’s tired of being painted with the broad brush of “lazy” and “unmotivated.”

I don’t know. Maybe not. I hope it doesn’t come to that.

Eventually David got up. He was crying at that point, though I’m not sure why, and I was shocked at his overwhelming attack and subsequent retreat. We sat there, the summer sun beating down on us.

Then he walked home.