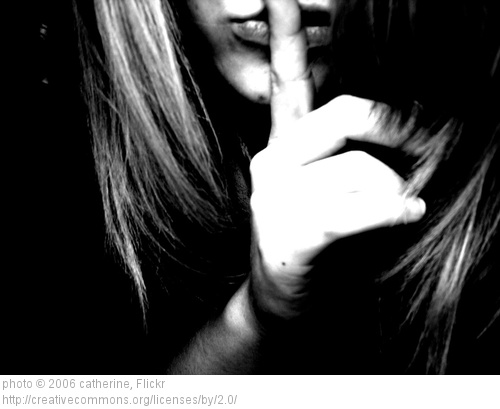 Ever since this thing happened in our community earlier this week, I’ve heard all kinds of comments. Well-meaning people end up saying really hurtful, harmful things. Things they would never say in the presence of someone who has experienced abuse or to the parent of the victim.

But abuse victims, and those directly affected by it, are everywhere. Since posting my last blog post, I’ve received numerous messages and emails from friends who experienced abuse as children. I had no idea.

Here are five things we need to stop saying when it comes to sexual abuse:

1) “I always had a bad feeling about the abuser.” Yet armed with this amazing insight and miraculous prescience you did what? Oh. That’s right. NOTHING. Hindsight is 20/20 folks, and if you had a feeling the perpetrator was the kind of person who could abuse a child, and you said nothing, that’s not a mark of your discernment. That’s a lack of judgment.

(Disclaimer: you may say “I always had a bad feeling about that guy” if you are weeping because you didn’t express your concerns earlier. You may also say this if you actually reported your feelings to the appropriate authorities.)

2) “This is just a reminder to parents that we have to be constantly vigilant.” Say this to your spouse, if you want. Or to yourself in the mirror. But for the love of God, don’t say this publicly or post it on your Facebook page because THE CHILDREN OF COMPLETELY VIGILANT PARENTS CAN STILL BE ABUSED, and when you say things like this you make the parents of abused children feel even worse than they already do.

3) “I’m so glad that I did (such and such) in this particular case because it probably saved my children from being abused.” Same reply as number one. What you’re really doing here is patting yourself on the back for…saving yourself.

4) Another life destroyed. Not true. Yes, the effects of abuse are terrible. Yes, there are consequences all around. But to say that their life is destroyed? To say (as I’ve heard some say) that this is, “in some ways more difficult than death”? Get good counseling, not just for the individual but for the family. Talk about what happened. Come together as a community. But please don’t write this life off as destroyed.

5) I would kill someone if I found out they were abusing my child. This is such a common sentiment, and it’s one that I understand. I’m not arguing with your right to vigilante justice, but I will say this: be careful about who hears you making such rash vows. There was a case in Florida where a little boy kept an abusive relationship secret because his father often said “If anyone ever abuses you, I’ll kill them.” The little boy believed his father, didn’t want his father to go to jail, so he didn’t speak up. Think about the consequences of what you’re saying.

I understand why we say these things. I’ve said a number of them in the past…because I was trying to rationalize why this wasn’t going to happen to my family. I had a certain number of rules in place, and if I followed those rules then I could keep my children out of harm’s way.

If you truly want to help, if you want to do more harm than good, then there’s one rule in situations like these that, if you follow, you’ll never go wrong.

Think before you speak. Would you say what you’re about to say to the agonized face of a parent who just found out their child had been abused? If the answer is no, the way forward is simple.