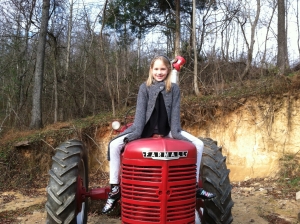 We picked the kids up from their classes and headed south, through a sky already growing dark even though it wasn’t yet 5:00. Winter days will do that here, especially cloudy ones. The van bulged at the seams, full of pillows and blankets and luggage for our annual trek to North Carolina for Thanksgiving.

We bought fast food so that we wouldn’t have to stop driving. Maile called out the orders and doled out the food. Last minute trades were bartered. Complaints were heard and mostly dismissed. Then we passed the milkshakes back.

“If anyone doesn’t finish theirs, pass it right back up to the front,” I called out, not getting my hopes up.

We continued south, two hours, three hours. We had decided to spend the night at a friend’s house in southern Virginia before driving the rest of the way on Friday morning. Four hours passed.

“Are we there yet?” Abra asked over and over again.

After four hours we got off of 81 and headed east, into the mountains, into the shadows. We missed the lane the first time, had to drive a mile up and turn around, then circle back. We called our friend. Her name is Andi.

“There’s a small sign by the driveway,” she said. “Just follow the lane and keep to the left.”

We pulled slowly into the lane, crossed a narrow, wooden bridge. We had arrived at God’s Whisper Farm.

The house was cozy and warm. There were books everywhere, even on the stairs where Andi’s husband had painted the kickboards of the steps to match the spines of particular books. The Hatchet. Paradise. The Lion, the Witch, and the Wardrobe.

Their dog, Meander, was pleased to see the children, and she wrestled with them until she was completely tired out, lying on her side and panting. Andi gave out bowls of chili, supper at 9:30pm, followed by hot apple pie. Then I took the kids upstairs and wrapped them in their blankets. They were tired from the drive, and they fell asleep while listening to us through the vent in the floor.

We spent the rest of the evening talking, just the four of us, the heater lulling me to sleep. It was one of those nights when you wish it was possible to purchase extra hours, an evening when you want to keep talking but eventually your eyelids grow too heavy.

We went to bed, and for some reason I dreamed about hobbits.

The next morning we woke up, ate bacon, eggs and toast, then put on our boots and walked the trails through the woods that skirted the mountains. Meander ran past us, then back again, and the kids took turns racing her, falling hopelessly behind. Lucy and Sam scaled a small cliff leading up from a creek bed.

Andi showed us where they hope to build a lodge and then walked us over to the place her father plans to build a small cabin. There was the chicken coop, in progress, and the sloping field where the goats will live. A flat expanse had already been planed out for a barn.

As we walked the acres of the farm, and the three younger kids climbed on the tractor, and Cade wrestled with Meander, I realized what I felt there. I realized what was so appealing about that little valley.

Andi and her husband have plans for that place, and they don’t seem too caught up in the concern that some of those plans might not come to pass. They’ve staked little signs into the ground with names that designate what they hope the future holds for each parcel of land: “Lodge” and “Cabin”. There is an overwhelming sense that things are not finished, that what you see is not what you get, that there is a story in the making. A beautiful story. A compelling story.

This, I think, is what the Gospel is all about. This is the Kingdom that Jesus invited us to take part in: an ongoing, compelling story, one full of hope. One where we take the time to place handmade signposts into the earth. Not signs that we anchor with cement or mortar, but signs that can be moved, signs that speak of a beautiful hope.

We walked back towards the van and the remaining four hours on the road to Charlotte. Lucy looked up at us with hope in her eyes.

“Mama,” she said to Maile, “when I grow up and leave our house, I want to live on a farm just like this one.”

This is the beautiful thing about hope. It’s contagious.

Please check out Andi’s new book, The Slaves Have Names: Ancestors of My Home.

10 Replies to “Where We Found a Thing Called Hope”