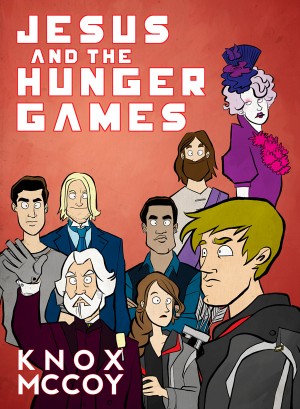 Knox McCoy is one of the brilliant blogger-friends that Maile and I had the opportunity to meet in real life while we traveled the United States earlier this year. He writes some of the funniest stuff on the interwebs – his series on the television show The Bachelor is a must-read. I don’t even watch the show. Honest.

Today he was kind enough to join us and share about his new book, Jesus and The Hunger Games.

So Knox, give us an idea of what to expect in this book, and where did such a great idea come from?

Jesus and The Hunger Games is the second installment in a series where I relate Christianity to a seemingly unrelated fixture within pop culture. For the purposes of this conversation, we can call it the “Jesus and …” series. Last year, I did Jesus and The Bachelorette and enjoyed the process, so I wanted to try the same method on the Hunger Games mainly because I blew through the trilogy in about 5 days and had to work through everything I’d just read.

Answering the bigger question though, random analogies and connections is kind of how my brain works. I understand ideas more richly when they emerge out of unorthodox comparisons so this is really just a super self-indulgent process.

Some people have decried The Hunger Games as too violent and inappropriate. Others argue it contains strong themes and messages relevant to our society today. Where do you fall on this?

Personally, I think that’s a lazy argument (the decrying it as violent and inappropriate). We’re talking about a context that exists within the framework of a fictional book. If this were something actually going on, I would say, “Yes, this is much too violent.” But it’s a piece of fiction. Moreover, it isn’t even a fictional piece that is reckless with its use of violence. The violence is very purposeful in terms of a story device (a setting that celebrates just such violence is clearly dystopic and thus supplements the desperation of the protagonist) and it isn’t slathered on carelessly. The violence, though violent, MEANS something. I think the themes of self, of class disparity, of desensitization are all extremely relevant to our society today.

If we read the book backwards, will we discover secret messages hidden in the text?

There are 3. One definitively answers the secret to eternal youth, one explains the ending of LOST and one discusses the McRib in an existential sense.

Talk to me about the similarities you see between The Hunger Games and the television show The Bachelorette.

Beyond the elimination format, zero. Speaking broadly, The Bachelorette sucks while The Hunger Games is such a thoughtful and well done series. If you put a gun to my head and made me choose, first I would be like, “Shawn, where did you get that gun?” And you’d probably say something like, “Walmart.” And I’d be like, “They sell guns now?” And you’d be like, “Yeah, it’s Walmart. They sell everything NOW ANSWER THE QUESTION.” And I’d be like, “Ok. The most intriguing similarity is that both touch on the burgeoning sense of voyeurism our society feels entitled to. Even though most people can agree that the contestants on The Bachelorette are mostly just people with their priorities entirely out of whack, we’re still seeing some of them in moments of emotional vulnerability and we do see them experience bold emotions like humiliation and sadness stemming from rejection. Culturally, we’ve gotten desensitized to this as we’ve seen more and more of it and people like me make fun of it and generally just have a big time laughing at these people.

Within The Hunger Games, we see a similar development as the citizens of Panem have become systematically desensitized to the killing of young children. Obviously, these instances of desensitization exist at opposite ends of the spectrum, but they do share that.” And then I would hope that my answer would suffice and you would put your Walmart brand gun down because who KNOWS how reliable they are, right?

Also, both make MAJOR use of roses.

Do you talk at all about which particular Bible characters would have done well on the Hunger Games? Who would be your odds-on favorite?

This is a fantastic question. I don’t but MAN would that have been a good chapter. My head is kind of swimming right now with possibilities. Hopefully this isn’t too big of a cop out, but I can tell you who I think would be one of the worst: Peter. He totally would be one of the characters to make a break for the bounty of equipment at the outset of the games and he probably would have been cut down by someone lame like Zacchaeus.

If you were a tribute in The Hunger Games, what would your strategy be?

Another fantastic question. Essentially, my strategy would consist of working smart, not hard and allowing others to do most of the combat.

I would build a few alliances and then also some with the outer districts, unbeknownst to each other of course. The plan with the outer alliances would be for me to link up with the Careers and go double secret undercover. This would allow me to stay in good company should things unravel. If things don’t unravel, I would stay with the careers and on the first night, I would volunteer for first watch. Once all the careers were asleep, I would give a signal to the outer district tributes and summon them to ambush the sleeping careers while I retreat out of the ensuing melee. Hopefully they would all take each other out.

If they don’t though, this would give me a few options: if the Careers are wiped out, I would link back up with the outer districts and decide on how to split up the alliance to my advantage.

If the Careers are somewhat wiped out, I would wound myself and emerge from the woods as a scattered member of the career alliance. I would allow the remaining skilled careers to take some revenge on the less skilled outer districts before picking off the weakened Careers at opportune moments.

If the Careers are not even remotely wiped out, but the outer districts are, I would stay with the Careers and divide and conquer their alliance through misinformation, ego and sabotage. Hopefully, I would turn some of them against the others and allow a secondary skirmish to unfold and play out before picking off the weakened survivors and accepting my crown as Hunger Games Victor.

Awesome. You totally fell for that. Now when The Hunger Games are instituted here in the US for almost-middle-aged people, and you and I become tributes, I will be one step ahead of you.

Time to wrap this up. Can you insert an excerpt from the book that will make NOT buying it a virtual impossibility?

Within Christianity, there’s been this systematic shift in our priorities, our duties if you will. We’ve become so hell-bent on helping people avoid hell, that we’ve subverted the underlying purpose behind our whole faith: loving others…serving others…helping others.

Instead, we’ve cast ourselves as Savior characters within our worlds. Saviors to other people, saviors to culture at large, we’re even Saviors to our churches and the idea of Christ as both try to acclimate to social changes within society. We’re basically super busy with all this savioring we’re doing.

But what we’ve forgotten is that we were never meant to be savioring anything in the first place.

In a sense, we’re like the Curators of this super awesome and trendy art show featuring the idea of Christ and all his teachings. But instead of curating and helping people connect with the ideas, we closed down that show and opened a new one across the street that is tangentially related to Christ but more through our filter.

When we aggrandize our role in things, we remove Christ and assert our own views and perspectives. We forget that not only are we the worst at being Saviors, but that we were never supposed to be one in the first place.

You can read more of Knox’s stuff at knoxmccoy.com or you can listen to his podcasts The Courtesy Laugh or Xtra Bacon.

Jesus and The Hunger Games is available for your Amazon Kindle for $2.99, or you can get it free by signing up for Knox’s email newsletter HERE.