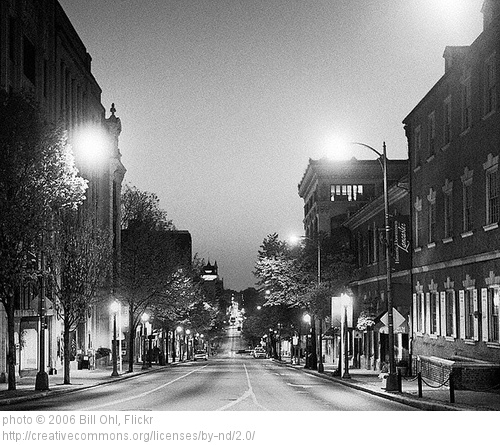 Someone shouted my name last night as we walked the city streets. A thunderstorm rolled in from the west but we kept meandering the alleys and there was that man playing a piano badly in an unlit corner across from the parking garage. I wondered who put it there. I wondered if they ever imagined a homeless man would find such joy in its sad chaos, those sounds of rain and thunder at his fingertips.

The sunlight struggled out from behind the storm clouds but it was too late and too low and we didn’t care enough to pay attention, so it sank behind all the buildings while we ate ice cream and pretended we lived there among the brick and the asphalt, pretended we could come back to that ice cream parlor anytime we wanted. We pretended the city was ours and we could have any house we wanted and that these days would go on, and we would be unchanged.

And then as we left and turned right on Prince Street and walked the broken-toothed sidewalk that runs along the galleries I heard a voice shout my name. You heard it too, because you stopped just like I did and looked west, but no one was there. Just another busy street, and people shouting, but not to me. We both turned reluctantly. We both kept looking over our shoulder.

Without the lights that came on as we left the city there wouldn’t have been any shadows. But they did and there were and we drove through them and they dripped from the car so we turned on our headlights and followed the beams into the country where the sound of cicadas or crickets or the smell of green felt louder than any part of that place we had just left behind. And I think perhaps that when we move there it will not be the noise that keeps us up but the silence.

Still, tonight, with the lights going out and the children going to sleep I can hear the echo of the voice that shouted my name through the city. I can still feel the way both of our bodies turned together, expecting to find someone we knew. Or perhaps someone we wanted to know.

There is something about someone shouting your name in a city that is not easily ignored or forgotten.