Today’s post is written by Emily Wierenga, and it broke my heart, perhaps in a way that hearts should be broken because I find myself wanting to randomly hug my four children all the time (but especially my 8-year-old girl). Let down your walls, inhale these words, and then please, please, please pre-order her book (there’s a link at the bottom of the page). These are the things worth writing about and speaking about but they need your financial support if they’re going to get off the ground.

So I Stopped Eating, by Emily Wierenga

We were moving, for the tenth time in seven years, and I’d seen a bad word on the side of the grocery store wall (but had no one to ask about it) and Mum didn’t tell me I was beautiful and I couldn’t go to public school and Dad was never home, so I stopped eating.

I chewed pencil, tasting lead. Our heads were bent over textbooks, together at the kitchen table, and Mum’s back was turned, while she rolled dough on the counter, and I wanted her to look at me, tell me she loved me, over and over, give me a mirror and trace my cheeks and help me believe I was worth something, but she didn’t know how, having never known it herself, and so I broke my pencil pressing it into prose and tried to find myself in the lines of the page.

I heard the sounds of girls going to school, ran to the door, and saw they were wearing pink backpacks and I wanted to run with them, but my legs were too fat; no one likes a fat preacher’s kid. Besides, we were home-schooled in case we should move again. Also, I had cried when I’d gone to kindergarten, so Mum had brought me home, ordered books, and vowed to teach me. That kind of thing was supposed to tell me she loved me, but I didn’t feel it. Because, to me, love was words and gifts. So I sat down to do my math and tried to forget.

I tried to forget the way Dad laughed with strangers in their pews, listened to them, as if their stories were more important than mine. And the way he closed the door to his study and sighed when I knocked, timid to ask him a question. I tried to forget the way he spanked me not knowing what I’d done wrong, only that Mum told him to because she was too angry to do it herself, and scared of that anger. It didn’t hurt me anymore, not even when he used his belt, because I refused to let it.

A neighbor saw me on the carpet, toy-playing, seven-year-old oblivion, and said, “What a big girl,” and I carried those words around like a bird in a cage, until one day the bird got loose and I stopped eating. Soon I would run on thin legs with the girls next-door.

I was nine and I felt 109. Mom let me go to school again, but I wasn’t allowed to do English class, because the books were too risqué, and she still didn’t say I was beautiful. The days were long and I was tired and no one could hear me, so I starved harder and the teachers couldn’t see me, so I shrunk my words making them smaller, smaller, until the teachers were forced to pull down their glasses and study the prose I’d made, the winning prose, and I aced class and I flunked recess.

At night, I dreamt of food. Mum found me, hunting for chocolates in my bedspread. I wanted her to hug me and make the fear go away, but then I was worried I’d eat real chocolates, because my guard would be let down with the soft of her touch, so I stopped hugging her for two years. My legs were getting thin, and that was what mattered, but I dreamt about her arms, and woke up hugging myself.

God didn’t care. He made me recite names each night before bed and I couldn’t go to sleep without reciting, because then people would die, and I wanted to die but I didn’t know it until the day everyone tried to force me to eat and I refused it all, and now it was clear to the world and maybe to God too: I was in control.

It was supper and we were seated and Mum was dishing, dishing, dishing and the macaroni and cheese piled orange and white as she handed them, plates plunking against old wood table, and I’d already decided, it tasted like straw, even before I took a bite.

Tonight, I would eat only half, and she’d threaten me with no dessert and I’d tell her point blank, that’s fine. Maybe it would make her worn sweaters unravel and her straight-lined school schedule smear and maybe then she’d take me into her arms and tell me she was sorry.

Sorry for praying that prayer when I was in her womb, the one I learned of later on, the one she said with good intentions not knowing how it would hurt me, the prayer which uttered God, don’t make my baby beautiful, in case she becomes vain. (I can see Mum’s hands trembling on her abdomen in the night as she offered her baby like Hannah did with Samuel, and it makes me love her, yet, despise).

In my own dark nights I worked to reverse that prayer. I’d train as though for war, to see food as nothing but a trap. I’d lie there feeling ribs, measuring wrists, planning the next day’s meals. And if there was to be a party somewhere, soon, I’d eat less in preparation, allowing myself the freedom to snack for then no one would know the difference.

By day, I’d peer into the mirror as if into my soul and imagine myself skinnier, beautiful. I’d creak onto the toilet seat after bath, spend half an hour turning this way and that, analyzing naked bones. Sucking in and pulling skin and strategizing how to become invisible.

The apple grew a face which mocked me, and so I didn’t finish it, for every time I defeated the food, I gained points against Mum, and maybe God, and I was winning. The food had nothing on me. Sometimes I’d trick it, making the piece of bread think it would fill me up then rip it into halves and eat only one, and there was a thrill in leaving food on the plate, as though I could disappoint it. Even the raisins in the tapioca seemed to stare holes, and I would push it away, feigning fullness.

But food was everywhere, and it never slept. It would beat me in my dreams—the cakes, the pies, the sandwiches. In my mind there would be a buffet, high-calorie. I’d gorge, drool, and crumbs would spill over into daytime and I’d wake feeling bloated, spend the next day getting back at food by eating less.

I’d suck in my cheeks in the mirror; I’d suck them in for photos and I’d try not to talk so I could suck them in day-long. It was tiring, this looking like a model, but I was determined to be beautiful. I would weigh myself every time I ate, every time I went to the bathroom; I’d take off my shoes, my socks, my pants, just to see the numbers drop.

And I wept through the pain, wept behind closed doors with my arms wrapped tight, but I couldn’t stop.

Emily Wierenga is an author, artist and freelance journalist from Neerlandia, AB. Please pre-order her book, Chasing Silhouettes: How to Help a Loved One Battling an Eating Disorder, to donate to your libraries, churches or the family down the street in need of hope and healing. Thank you. 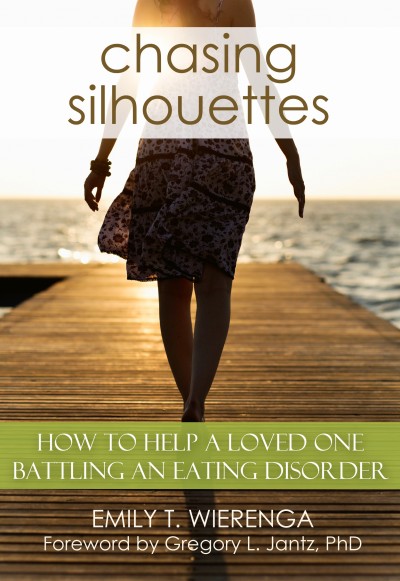 12 Replies to “So I Stopped Eating”