Madness does not come by breaking out, but by giving in; by settling down in some dirty, little, self-repeating circle of ideas; by being tamed.

There is something about seeing animals in a zoo that saddens me. I know they are, for the most part, treated well. I know that many of the animals in our zoos today are there because there were found injured or orphaned. But walking on that paved path, seeing them lying lazily under fake stones with huge balls to play with while people gawk or laugh or take photos, is such a desperate sight.

Then our big blue bus pulled through Yellowstone.

For the five days we were there, all we wanted to see was a bear in the wild. Preferably a grizzly. Preferably with cubs. And preferably at a safe distance. There’s nothing like a mauling to ruin an otherwise good vacation. 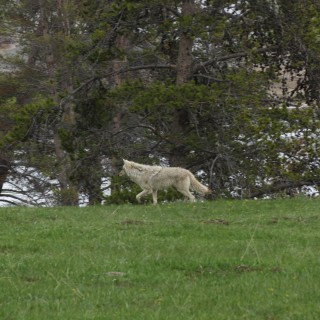 We saw huge, lumbering bison wandering through fertile fields. We saw lone coyotes scamper along the edge of the forest. We saw majestic elk running in herds. But we couldn’t find any bear.

Then, on day three, I decided to drive out to check my email. We had no internet or cell phone access at the campground, and it was about thirty minutes to a high point where I could get online. Maile and the kids decided to stay behind, and I took off in the minivan. You see what’s coming right?

Along a particularly beautiful stretch, cars lined the road – this usually means there’s something cool to see, so I slowed down and parked along the edge. Then I saw them: a grizzly bear and two cubs galloped down a nearby hill, towards the road. Everyone outside of their cars suddenly scrambled for cover as the bears sprinted across the road, between the single-file line of parked cars, through the adjoining meadow, and into the river. All three of them swam through the icy water, their heads bobbing along.

They were wild and untamed and unpredictable. There was something hugely appealing to this thought, that they lived life on their own terms, without protection from mother nature or other animals. They foraged for their own food. They bred and bore cubs and hibernated, and the life they lived was their own.

They were assured of little, but they were also imprisoned by no one.

Free yourself. Live the wild adventure that God has prepared for you. Run through the fields. Swim the icy river. Be who you were created to be – it’s the only way to stay sane in a world gone mad.