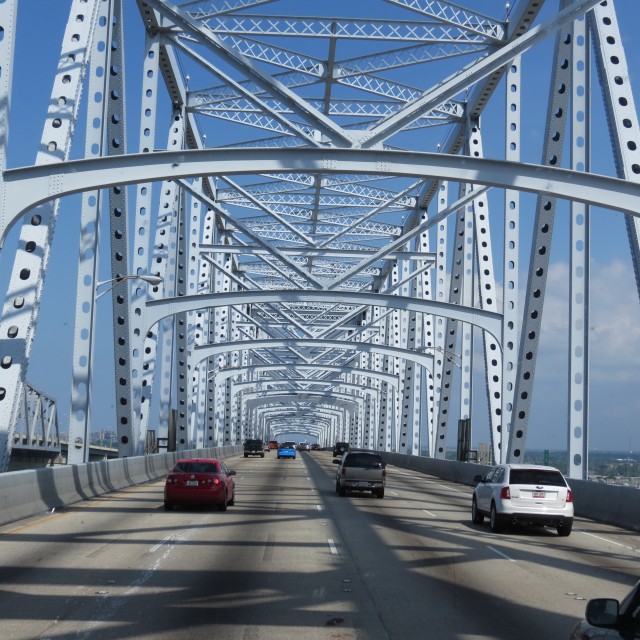 It’s Monday night and the bus is parked at a truck stop somewhere outside Des Moines. I sit in the passenger seat feeling tired and irritable, playing some game or other on my iPhone. The sun, gone from the sky, leaves a wake of color where it was just shining bright and hot a few minutes ago.

I suppose there are many tangible reasons for my irritability tonight: a desire to be home (wherever that is), anxiety about the future, and three and a half months in cramped quarters with five other people (all of whom have many more reasons to be irritated with me than I do with them). Worrying about waste water tanks and fresh water tanks and the money required to keep this beast running.

But emerging in my mind is an unsettled feeling, something new. Something that’s been gaining ground as the trip has progressed. Something beyond my own circumstances.

It started to make itself known in a tangible way a few days ago, when we were in Sioux Falls, South Dakota, and we approached the on-ramp of the highway. A forlorn man stood there on the corner. He looked rather pitiful, like a homeless person who had tried to dress up and fallen horribly short. His hair looked combed, but in a way that made me think it wasn’t combed often. He looked self-conscious. Perhaps that’s what he was, because as we drove up, I noticed he held a cardboard sign. I expected the sign to say something like, “Homeless, need money.” But the words I saw scratched in black marker put a lump in my throat.

Worthington is a town in Minnesota, about 60 miles away. And tonight, as I sit here playing some meaningless game on my iPhone, I’m wishing I would have taken the afternoon and driven him there. Two hours out of my life. I wonder if someone going to Worthington (or that general direction) took him. Or if perhaps, at some graduation ceremony, a girl scanned the crowd, disappointed because once again her father had not come.

Then tonight, as we drove to a Ruby Tuesday’s to use a gift card some friends had given us, we passed another person, a woman this time, standing at another intersection.

“Stranded. Need food,” the black magic marker had written on her strip of cardboard. And again my heart caught in my throat. And my jaw clenched. And I drove on by. We went to Ruby’s and had a good meal, and my youngest cried about his dessert, and I found myself disappointed with what I had ordered.

But my stomach was full, and I wouldn’t have to worry about food until the next morning, when I would look through the fridge and eat whatever I wanted to eat.

Why didn’t I stop the van and take her along?

Again and again, poverty has called out to me on this trip. More than at any other time in my life. Maybe it’s because I’m out of my routine and my eyes are open. I’m looking around. I’m more aware. I’m in surroundings that I do not take for granted.

Again and again, I’ve been sorely disappointed by my response, which basically has been confusion, or uncertainty, or a willingness that comes far too late. My automatic reaction to those in need is skepticism, or distrust. Which is especially sad, considering that I have spent the last 35 years in church. 35 years going at least once a week, and up to four times a week, to a place where people meet who have dedicated their lives to following Christ. Yet after all of those years, I still don’t know how to respond to poverty.

Of course, I do not blame the church. I blame me. I’d like to say that today was the last time. Never again will I encounter poverty without doing something. Anything.

Yet that feels like so many empty promises, and I’m left here, in the passenger seat of a big blue bus, and the sky is almost dark, and I don’t feel that I understand it any better than I did before.

Last week I offered to answer any question you folks cared to ask about our trip. 24 of you took me up on it – tomorrow I begin answering them. Don’t miss it.