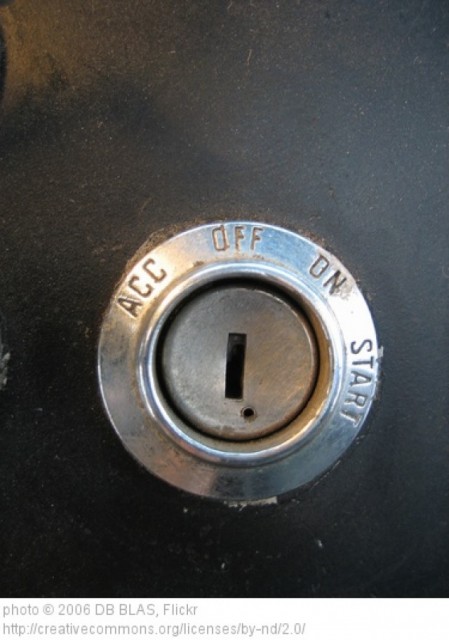 We squeezed the bus into a narrow, conventional gas station (as opposed to the truck stops we’ve been frequenting). Maile got out and peered up to make sure we didn’t clip the overhang. I put on the parking break, then filled the tank with $400 worth of diesel. Ouch.

My main concern at that point became our exit route: used cars lined the back of the gas station parking lot but I couldn’t cut the corner too close or the minivan we towed behind would hit the gas pump and blow up the entire city of Orange Park. It’s become interesting to me on this trip, though, how just when we think we have all the potential pitfalls in life identified, something completely random happens. Something we never could have imagined. Something immeasurably random.

Something like the entire ignition falling into the dashboard.

I sat in the driver’s seat holding the bus key in my hand, staring at the new hole in the dash, perfectly round. I would not have felt any more shocked if a rabbit disappeared in there after the ignition (“I’m late, I’m late”).

An empty hole. Where the ignition used to be. My first response (not usually the smartest one) immediately shouted, “Quick, reach in there and grab it!” So I stuck my index finger into the hole. And my finger got stuck.

Maile stood outside the bus, waiting to help me navigate the minefield of used cars and gas pumps. She looked at me impatiently. What was taking me so long? Why hadn’t I started the bus? Laughter crept up on me like the wind, or an inconsequential birthday, and I waved her inside. She opened the bus door.

“The ignition just fell into the dashboard, and now my finger is stuck,” I said, laughter erupting out of me. She looked at me like I may have lost touch with reality.

Just then I gave a mighty pull and yanked my finger out. A thick layer of skin around my knuckle fell down into the dash, joining the ignition. Now what?

I aimed the flashlight down the hole. The ignition and its accompanying wires rested three or four inches below where it should have been. I got on my back below the steering wheel and peered up. I could just about see it. Maile gave me a chopstick and I tried to push the ignition up – she sat poised with tweezers, a Mr. Miyagi, waiting to snag it. Not working.

Eventually I found a few small screws and took them out. That particular piece of dash popped off. The ignition fit right back into its rightful place.

All things to keep in mind when the unexpected take place.