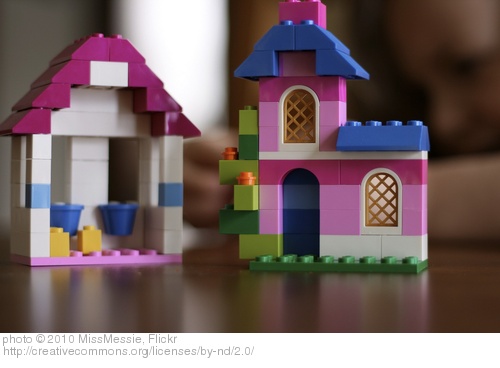 I grew up on Legos. There may or may not have been a time in my life when I actually believed most structures consisted of plastic blocks hooked together by raised, round dots. I still sometimes check the top of my head for a circular band on which to attach my baseball cap with the over-sized brim.

Now, at the age of eight, my son is obsessed. Most Christmases and birthdays involve Legos – he’s constantly taking things apart, building his own stuff, then digging the old instruction manuals out of the closet and reconstructing the original (something which requires even greater patience, since by that time all the pieces have ended up in the large plastic, central storage container which contains the remnants of every set he’s ever owned).

I noticed something interesting in the last year: both of my daughters have become very interested in Legos. I’ll find them fiddling with the pieces, building houses and creating various structures. So Maile and I decided to buy each of them some Legos for Christmas. For one of them we bought a house from the “normal” Lego line. For our younger daughter we found one of Lego’s newer products: a pink bucket filled with all kinds of Legos. They can be built into various configurations. The only difference between this and the blue bucket we bought for Cade is that the pink one contains different colored blocks and little Lego flowers, which my youngest daughter arranges ceaselessly.

So when I found out that Lego is creating “Legos for girls,” my initial response was…hooray! My girls are starting to enjoy them, and maybe a change in color or subject (they’re not really into Star Wars or Ninjas) would increase their interest in building. Heck, maybe someday we could credit Legos for Girls as the reason my daughters became architects or engineers.

Someone on Twitter made a disparaging comment about “Legos for Girls.” I got a little defensive. I am not one to force the stereotypical gender roles on to children, or at least I do my best not to, but I saw Legos for Girls as a potential barrier breaker, not a barrier creator.

Then I read the following excerpt from the article “Lego For Girls: Have They Stooped to Stereotype?”:

LEGO Friends, as the new line is called, creates a place called Heartlake City which thus far consists of a beauty parlor, a café, a bakery, a clothing design school, a vet’s office, a sound stage, and, thankfully, an inventor’s workshop. (So much for municipal services.) There are no men in Heartlake City, except for the father of Olivia, one of the five core “friends,” who are not minifigs at all but redesigned mini-dolls that come with the following accessories: a purse, a hair brush, a hair drier, four lipsticks and two barrettes; a spatula, an electric mixer and two cupcakes; and for when they’re not primping or baking, a puppy dog and a pink book with butterflies on it. Is this message — with its emphasis on physical appearance and limited career choices — really any different from that of Disney’s princesses?

What’s worse, LEGO Friends doesn’t give girls the same sense of mastery and accomplishment that it gives boys. Usually, when you open a LEGO set you will find several smaller bags numerically labeled in the order in which to build, along with a booklet of diagrams of the steps. But LEGO Friends has dispensed with this system, so that girls can begin playing without completing the whole model first. So much for learning how to follow instructions, or finishing what you started… (bold emphasis mine)

On Wednesday I posted a Letter to My Daughters, Ages 7 and 3. If they want to play with pink or purple toys instead of green and brown, that’s fine with me. I’m not going to force them to play with gender-neutral toys. But I’ll tell you this: they’re just as intelligent, capable, patient, and persistent as any boy their age. Probably more so. And if I give them Legos for Girls, aren’t I putting them at a disadvantage when it comes to building, following directions and creativity compared to their male peers?

What do you think about Legos for Girls?

40 Replies to “A Knee-Jerk Reaction to “Legos for Girls””