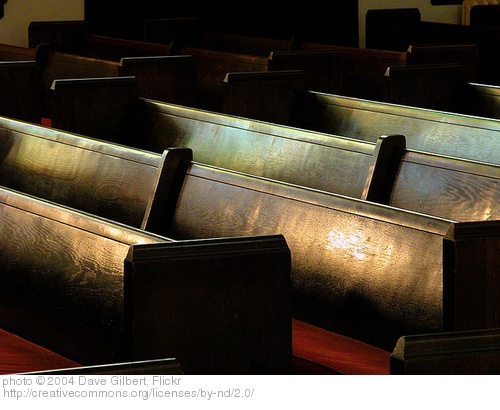 The little boy walked out of his dad’s office and wandered through the empty church. Even though his father was a pastor, he had never been in that building during a weekday when the lights were out and stillness crept down the narrow hallways and stairwells.

He went down into the basement. This was the lively heart of the church, at least on Wednesday nights when all the kids had activities and the adults vanished off into rooms or the upstairs auditorium. It was almost creepy, the activity and noise traded for dim light, shadows, and the hum of the refrigerator in the corner.

He crept up a side stairway that led up into the main auditorium. He cracked open a door normally locked, then slipped in without a sound. He sat on one of the long pews at the back, his feet dangling toward the floor.

The only light in the room came in through two large windows behind the stage, huge sections of glass fifteen feet high. The rest of the church pews lined up in front of him, one after another, like long hurdles lined up too close together. At the front of the middle aisle, facing the nonexistent audience, sat a small wooden table on which rested a huge Bible. On Sundays when communion was served, the shimmering blood of Christ filled small plastic cups sitting on silver plates.

The boy walked up the middle aisle, pushing through the shadows. At the front, he looked at the open Bible. He touched the pages with his uncalloused fingers. He looked up at the dust particles floating through the streams of light like tiny planets. He blew a quick burst of breath into the shaft of light, and the minute worlds swirled like angry hornets.

He got down on his bottom and slid under the table. He looked out from his hiding place towards where the audience usually sat, or stood, or clapped their hands, or shouted. It was a lively church. A loud church. An emotional church.

Yet there was something in that stillness that made it easier to believe in God than any sermon or song ever had. He could imagine God in that place, but not the God on the flannel boards. Not the God that raised money or split churches.

Sitting in that small square of darkness under the communion table, the boy found himself believing in a God who could create something out of nothing. A God who could stop death. A God who could look on all of the galaxies he had ever created and orchestrate their movements.

The boy didn’t want to leave that place. Twenty-five years later, he’s still looking for it.

2 Replies to “A Boy Finds God in an Empty Church”