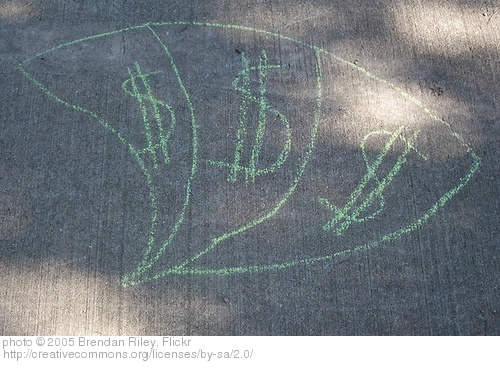 Each child at the Thanksgiving program stood from their seat and said what they wanted to be when they grew up. My children happened to go first.

Cade rose, a smile on his face, and proudly proclaimed: “Writer!”

Then Lucy, always a little bashful, always looking for that thin ray of acceptance: “Librarian.”

For the last few weeks, these have been the career choices. Not too long ago they were policeman and gardener. And before that something else. I remember those days, when you could change your mind about your future as easily as one changes the toilet roll.

Later in the week, my wife remembered Cade’s choice and asked him about it.

“Well, Daddy’s a writer,” he began. Maile nodded. He continued. “And I want to make a lot of money.”

This conversation came up again during our drive to Tennessee last week, just after we realized The Beast (our 1990-something GMC Safari with 230,000 miles) would not play music any longer. And again, when we realized that, due to our windows not being able to open, it would be good if I could avoid crashing into deep water. And again, when we reviewed our budget, remembering that last December we had something like $17.00 in our account and I wasn’t sure where the Christmas-gift money was going to come from.

“Well, at least Cade won’t have to deal with these things,” we joked. “He’ll be a writer.”

I’m fairly certain Cade’s monetary fascination with writing comes from his visit to a book signing I did the other week. By the time he had arrived, I had sold six or seven books. I took this wad of cash out of my wallet, along with the $100 in $5 bills I had taken along for change. His eyes grew wide at the sight of so many greenbacks.

“Wow, Dad! Did you make all of that money selling books?”

I wanted to explain to him that most of it was mine before I arrived, simply change that I brought with me. I wanted to help him understand the whole idea of profit and loss, that even though I sold the books for $15 each, that didn’t take into consideration their cost to me, or shipping and handling, or the time it took to write them.

But he is eight years old, and we didn’t have much time.

Sitting here in a dark room, working on this post beside two-year-old Sammy’s bed, listening to him snore, I see a lot of humanity in Cade. We see money as this panacea, this wonder-drug, this thing that will make life more than it might be without it. And at a very young age, we start forming these convictions, that we want money, that it will make us happy, that we will do whatever it takes to get it.

But, just like Cade, we don’t understand the cost. We cannot comprehend, most of the time, how little those sheets of paper or numbers in a bank account actually have to do with joy or even happiness or a life well-lived. We do not see the things we give up in the pursuit of money, or how easily a life can be wasted.

I think I’m ready to talk to Cade about it sometime soon. I’d like to explain to him that, for me, writing is the thing that sets me free. It’s the one activity I could do for days and weeks, months and years, that would not drive me into a meaningless existence. And I want to tell him that I will spend the next ten, twenty, or however many years helping him discover what does that for him. Maybe it will be writing. Or singing. Or running a business.

Whatever it is, and no matter how much money it makes him, I hope it brings him as much happiness as writing has brought to me.