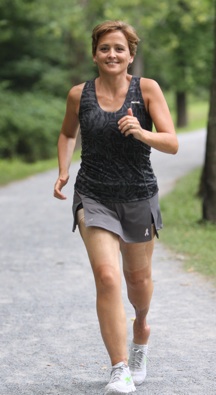 I feel privileged to know Janet and am thrilled that her story, Because I Can, is finally available in print. Join me in welcoming her to the blog, and if you have any questions for Janet feel free to ask in the comments section below.

1 – The part about the accident is gripping – how much of that do you remember, or is it mostly stuff that Jerry and others told you later?

Though I was conscious for a short time post-accident, I have no clear memories of it. Jerry, the boys and I spent many hours talking over the details, so I could write about that time. For a time, I wanted one of them to write the first few chapters, or at least one chapter, but that didn’t interest any of them.

I do have a faint memory of helicopter blades … thinking about that memory or hearing a helicopter still causes something inside me to tense up. My counselor tells me that means I heard that sound when I was in a traumatic situation, even though I don’t clearly remember hearing it.

2 – I’m fascinated by the idea of those hallucinations you had in the early days – is it still difficult for you to differentiate between what actually happened and what was only a dream or do you have it pretty well sorted out by now?

I have it sorted out now, because I’ve asked Jerry about each one many times … and I trust that he’s telling me the truth about what did or didn’t happen. But some of my memories of the most vivid hallucinations are still almost as clear as they were seven years ago. If I think about them for any length of time, the sights/sounds/smells/etc. come back … along with the fear and trauma that accompanied many of the hallucinations.

3 – Running helped you recover from both depression, before the accident, and then from many of the physical and emotional affects of the accident itself – writing also played a big role in your recovery. Can you talk about how running and writing helped you in different ways?

I began walking more and then running again about the same time I became more serious about writing Because I Can… so for a few years my life was all about one word and one step at a time. If I did some of each every day, I considered it a successful day. In many ways one helped the other… running gets my creativity flowing, but generally results in disorganized streams of thoughts. Writing out what I’m thinking helps me bring some order and meaning to my jumbled thoughts. Plus both running and writing require endurance… you can’t go from couch to a race overnight, nor can you write a book overnight.

4 – Do you find it difficult when you encounter (people like me) who take their physical well-being for granted?

For the most part I don’t … I know that I took my health more for granted pre-accident, so I have to give others grace for where they are. Plus I love food and still have room for improvement in my diet. But, I have to admit I find it frustrating when people could make choices to have a healthier body and they imply that they don’t have a choice. Though I’m doing better than doctors ever anticipated, I still have a deformed leg and pain from various injuries … I cannot do anything to change that. So it can be hard to have grace for people who say they can’t do this or that … but in reality if they made different food and/or exercise choices, they could.

5 – When you and Jerry were at our house this summer, you didn’t hesitate at all to show people your leg. Did it take you a while to reach that point?

As I wrote in Because I Can, “I always kept my leg covered, rarely even allowing myself to see it. Yes, that is possible. I wore long pants or skirts day and night.”

I did that for about two years … then with counseling and time, as I came to a place of acceptance with my new normal, I began wearing shorts while running and showing it to others. Over the years, a few reactions have made me wish I hadn’t shown it (one person almost fainted), but overall I’ve found that it encourages people and gives them hope that they can adjust to unwanted changes in their life, so now I show it freely. (usually with a warning that if someone is squeamish they might not want to look)

6 – What is one thing you hope to say through your book to people who have a poor self-image?

Do what you can to change what you can … then make peace with the rest. This is not a dress rehearsal, you have one life to live … and it’s too short to waste any of it feeling sorry for something you can’t change or to not make changes if you can.

One key to making peace with the things you can’t change, whether they be physical struggles, relationships that change, or other losses in life, is to be honest about them. You can’t deny your reality. I find the most peace, energy and hope when I live in the tension of celebrating the good things in my life while being honest about the disappointments.

You can order paperback copies of Because I Can at Janet’s website and on Amazon. Or order for your Kindle or Nook. You can connect with Janet on her blog, on Twitter and on Facebook.