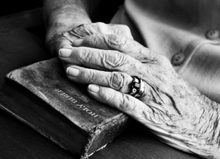 We parked illegally along a yellow curb in the school parking lot, just up the street from my grandmother’s single-story home. My kids poured out of the van like four puppies, dashing across the street while our warnings rained down on them.

“Watch out for cars!”

Seems like just about everyone in the area knows my grandma. Most just call her Mom Smucker. She sat in a lawn chair off to the side of her garage, still wearing her small covering and a plain blue dress. She doesn’t always remember my name anymore. Her recent stroke has turned her own mouth into a choking hazard, and even her skin has begun to fail her – small scratches take months to heal.

I walked up and bent over, spoke very close to her face. I kissed her cheek and she grabbed on to my chin with her vice-like grip, as if she could determine who I was by squeezing hard enough.

“Oh, Shawny,” she sighed, as if we hadn’t seen each other for a thousand years.

Everything she owned sat behind her in that garage or sprawled out in the yard. It felt kind of awkward, as if her slip was showing.

She had moved into an old folks home, and it was time to sell her stuff.

“Tententen-I have nine-do I hear ten? nine-ten? nine-ten…nine-ten? Sold! To number…ma’am, what’s your number? Number 112 for $9!” the auctioneer’s called out to the crowd, his voice alternating from enticing to demanding to chiding.

“Do you remember those toy bricks?” my sister protested. “Uncle Carl just bought a piece of my childhood!”

Then the auctioneer held up a small medicine cabinet with a mirror – it contained a note, hand-written:

Chub said he wants this but I guess he’ll have to pay for it.

Everyone laughed. The atmosphere began to lighten. Chub is my Uncle Sam’s nickname, and he did have to pay for it: $290 later, it was his.

My cousins and I sat around, not buying much, mostly just bemoaning the wealth of our aunts and uncles who were, in the words of my sister, “buying up our childhood.” Fortunately they took it easy on me and let me buy the family Bible (for $65).

I walked up to my Grandma with the Bible, wanting to make sure she knew that I had purchased it, that I’d take care of it.

“I wanted it back at first,” she said, smiling, “but then when they handed it to me, I realized it’s not the Bible I take to church. It’s too big!” She laughed at herself, as if for one brief instant she pictured how silly she would look, walking into church with a Bible she couldn’t even carry herself.

Some things, unwanted, got tossed in the dumpster. The sound of breaking glass made me cringe. Soon the garage and the yard emptied. We all stood around in the near-dark, on an unseasonably cool night, talking, looking for a reason to stay a little longer. We wrapped our arms tightly around ourselves to stave off the cold, or perhaps the finality of the sale.

There was this sense of sadness for grandma, joy that we were together, and a resilience that can only be experienced when you see life for how short it really is, yet still decide to smile.

My uncle has already bought the house, so it will stay in the family for now. I looked up at the roof – we used to watch fireworks up there on the Fourth of July, scrambling up to the peak with uncertainty, the large explosions shaking my tiny chest. The yard witnessed many vicious prisoner’s base competitions between my aunts and uncles when I was younger. Strange to think they’re all in their 50s and 60s now – they haven’t played prisoner’s base for years.

Then I realized we hadn’t sold her life out from under her. In fact, the most important pieces of her life were still standing there in the cold, talking to her, talking to each other. Our family isn’t going anywhere (evidenced by the 15 or so great-grandchildren playing in my uncle’s yard).

“Well, this was a fun day,” my Grandma said to my dad, sounding very much like a child.

The sun disappeared behind the school, and I shouted through the dark to my kids that it was time to go. They moaned and groaned, said good-bye to second cousins they hadn’t played with before. I thought about the entry in the Bible I had bought:

Where will all the stuff that I own, all the trinkets and gadgets and toys, be in 70 years?

Similar blog posts include:
Whatever Hurts Us Makes Us Stronger: Thoughts On My Grandma’s Stroke