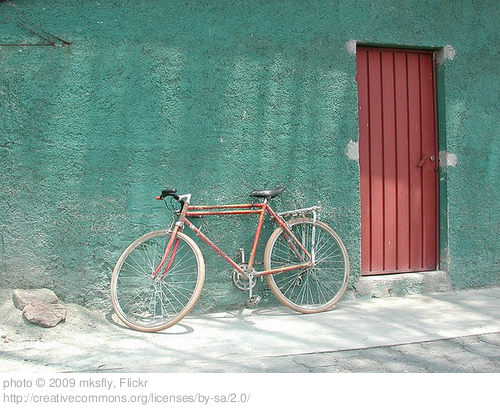 The little boy sat by the window, staring through the dusty screen. Flies twitched up against the mesh, their jerky flight eventually finding a way through. The boy lifted the fly swatter slowly. He was a ninja, or perhaps The Karate Kid.

Smack. Another dead fly. Another penny. Then he went back to waiting.

As I unscrew the nut holding each of the training wheels on the small pink bike, my two oldest bombard me with questions.

“But how will we balance?”

“I don’t want to ride a pink bike. And what if we wreck?”

“Here, put these up on the shelf. You won’t know how – that’s the point. Not at first. I’ll run along beside you. Don’t worry about it.”

The boy dropped the fly swatter and sprinted through the screen door. It slammed behind him, the sound of a baseball off a wooden bat. The sound of summer.

“Did you get it?” he called out across the expanse of yard. His father didn’t say anything, but the smile on his face was answer enough. The boy whooped! and danced around, the same dance he saw Indians do after scalping the cowboys on the show he wasn’t supposed to be watching (but he watched anyway) that Saturday morning. It was the same dance he imagined Max dancing during the Wild Rumpus.

“What was that?” his dad asked, laughing, pushing an old brown and tan bike across the grass.

“Here you go,” his dad said. He stood back and watched his son’s reaction. His son didn’t know it at the time, but his dad worked for a non-profit with wages under the poverty level. The quilting his mother did was not just for fun, as he believed, but so that she could buy the kids their school clothes that coming fall.

The bike was ugly as sin. A rusty brown body with a tan rear-wheel fender. The handlebars flared out. The wheels used to have white walls, but after years of pounding were scratched and faded, the same rusty color as the bike.

The boy laughed. He loved it.

“Put your feet up on the pedals. It’s okay. I’ve got the seat. Go ahead. Now, I’ll run behind you this time, just pedal. Ready? Go. Pedal. Pedal. I’m here. Pedalpedalpedalpedalpedal!”

The 34-year-old man (really? he feels like a boy) runs behind the bike, holding the seat, cheering them on.

“Are you ready to try it on your own this time?” the boy’s father asked him.

The boy swallowed hard. The short hill in front of him was Mt. Everest. The dragonflies with their rainbow wings hovered like buzzards waiting for him to crash so that they could pick the (mostly nonexistent) meat off his fragile bones.

The boy’s father released him. The bike picked up bumpy speed, shot through the yard. The boy laughed. He was doing it! Steering, though, that was a problem.

Straight into the thorn bush.

“Great job!” his father called out, running down Mt. Everest in seven bounding strides. He pulled the boy, his son, from the bush.

The boy was scratched, smiling.

2 Replies to “My First Bicycle, or The Ugly Brown Bike Meets the Thorn Bush”