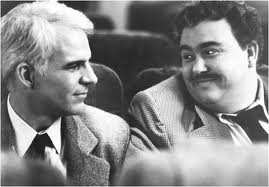 In 1987, “Planes, Trains and Automobiles” hit the big screen, loaded with two of the funniest men ever to walk the planet: Steve Martin and John Candy. I was in 4th grade and the movie was rated R, so there’s no way I saw it when it first came out, but eventually this movie became one of my go-to comedies (either from the local video store, or on TNT on Sunday afternoons).

If you’ve seen the movie, you know some of the classic lines involve hands between pillows as well as Steve Martin dropping the f-bomb. What you probably didn’t know is that some valuable writing secrets are hidden in there:

1.  Don’t be an annoying blabbermouth:

Neal: Eh, look, I don’t want to be rude, but I’m not much of a conversationalist, and I really want to finish this article, a friend of mine wrote it, so…
Del: Don’t let me stand in your way, please don’t let me stand in your way. The last thing I want to be remembered as is an annoying blabbermouth… You know, nothing grinds my gears worse than some chowderhead that doesn’t know when to keep his big trap shut… If you catch me running off with my mouth, just give me a poke on the chubbs…

This can happen in a multitude of ways in your writing, but the most popular seem to be excessive use of detail or employing a boring narrator who goes on and on. Here’s the deal – when you write, don’t be an annoying blabbermouth.

2. Always be aware of what is going on in your writing:

[waking up after sharing the same bed on the motel]
Neal: Del… Why did you kiss my ear?
Del: Why are you holding my hand?
Neal: [frowns] Where’s your other hand?
Del: Between two pillows…
Neal: Those aren’t pillows!

3. What’s your legacy as a writer?

Del: When I’m dead and buried, all I’ll leave behind are some shower curtain rings that didn’t fall down. Some legacy, huh?
Neal: At the very least, the absolute minimum, you’ll have a woman you love to grow old with. You love her, don’t you?
Del: Love… is not a big enough word. It’s not a big enough word for how I feel about my wife.
Del, Neal: [raises drink] To the wives!

Are you throwing things together, not giving your craft a second thought? Do you write the same way a child makes their bed? Or are you studying, learning from other great writers, listening to critiques? Don’t let your writing legacy be the equivalent of shower curtain rings that didn’t fall down.

Is your writing like a quick stare that your reader quickly forgets, or is it like a picture that they can carry with them? As the old adage goes, “show, don’t tell.”

5. Be a discriminating writer:

Neal: You know everything is not an anecdote. You have to discriminate. You choose things that are funny or mildly amusing or interesting. You’re a miracle! Your stories have NONE of that. They’re not even amusing ACCIDENTALLY! “Honey, I’d like you to meet Del Griffith, he’s got some amusing anecodotes for you. Oh and here’s a gun so you can blow your brains out. You’ll thank me for it”…And by the way, you know, when you’re telling these little stories? Here’s a good idea – have a POINT. It makes it SO much more interesting for the listener!

This is such a great quote on writing – think about what you’re writing. Figure out how to tell things in ways that are “funny or mildly amusing or interesting.” Your reader won’t blow their brains out from boredom, but if you can’t hit one of those three they will stop reading.

So what about you? Have you ever seen “Planes, Trains and Automobiles”? Any other writing secrets hidden in there?

3 Replies to “Five Writing Secrets I Learned From “Planes, Trains and Automobiles””