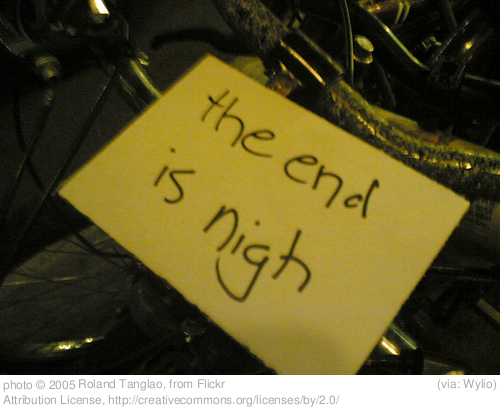 After six weeks, I’m glad we finished up our book discussion on Rob Bell’s Love Wins (mostly because I’m getting tired of the early Sunday mornings). Here are five final thoughts and then I’ll never mention this book or author again (something that is very unlikely):

1. It is possible for people from different backgrounds and generations and denominational preferences to have civil conversations regarding hot-button topics like eternal destiny and salvation. Who knew? We all challenged each other while respecting each others beliefs, and I learned a lot about the importance of listening (even though I probably spoke a little too much).

2. Understanding a writer’s audience is just as important in analyzing contemporary writings as it is in analyzing Biblical texts. For example, Rob Bell writes, “I’ve written this book for all those, everywhere, who have heard some version of the Jesus story that caused their pulse rate to rise, their stomach to church, and their heart to utter those resolute words, “I would never be a part of that.”

So guess what, academic pastors who were angry that there were no footnotes or bibliography? Guess what, Christians who want more explicit references to the Bible? Bell’s audience wasn’t academics, pastors or even Christians. Does this allow for bad theology? Of course not. Does this explain Bell’s less academic, less “Christian” (whatever that is) approach? Yes.

3. Actually reading a book is just as important in understanding contemporary writings as it is understanding Biblical texts. The percentage of Americans who read the Bible at least once a week is 37%. I’d imagine way less than that actually red Rob Bell’s book. I would like to call a moratorium on people talking about things of which they are ignorant. If you’re not comfortable reading a book or watching a movie based on what you think it’s about, then please refrain – it’s a free country. But you also forfeit talking about said book or movie as if you have seen it – that’s called gossip.

4. When Jesus died on the cross, two thieves died beside him. If I would have been a follower of Jesus on that day, it would have been easy for me to look at those thieves and think, “Those evil men are going straight to hell.” But what would have been unknown to me was the fact that one of those thieves looked at Jesus and said “Remember me!” Simply that. No Roman Road. No prayer of salvation. Did he even know Jesus’s name? We’ll never know. But he asked Jesus to remember him, and Jesus said he would join him in paradise that very day.

Who am I to make a judgment call on whether that person of another faith did or did not go to heaven? How can I possibly know?

“Jesus invites us to trust that the love we fear is too good to be true is actually good enough to be true…Jesus invites us to become, to be drawn into this love as it shapes us and forms us and takes over every square inch of our lives. Jesus calls us to repent, to have our minds and hearts transformed so that we see everything differently.” (that was Rob Bell)

“But whether or not their motives are pure, the fact remains that the message about Christ is being preached, so I rejoice. And I will continue to rejoice.” Philippians 1:18 (that was Paul, with a little emphasis from me)

Thanks for following along. You guys and girls have been just as gracious as the folks in my class, and for that I am grateful.