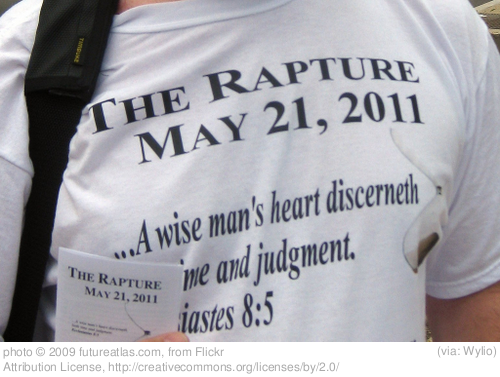 One evening during junior high, I arrived home from playing at the creek with some friends only to discover that no one was home. Mom and Dad were gone. Sisters, gone. The sun was setting, and I was starting to worry.

Where did everyone go? I wandered back through the house again, walked around back, checked in the garage – no one.

Everyone had simply vanished.

I was not a normal child.

Take my fears, for example. Most kids are scared of the dark, or thunderstorms, or the bogey man. But not me – I wanted my room as dark as possible at night, and I sat out on the front porch to watch even the most violent of summer storms. As for the bogey man, well, I could take him or leave him.

This is not to say that I had no fears – only that my fears were not those of ordinary children. For example, one of my greatest fears can be summed up in two words:

As a child I was taught that some day God will take all of the believers from the earth in one giant snatching motion – one minute they are here, the next they’re gone. Much in the way I pick out all the red Skittles, only faster and with less deliberation (I vacillate between the reds and the purples – God will apparently show no such hesitation). When this takes place, and if you’re not a Christian, you’d better hope to God you’re not on a plane with two Christian pilots, or in a taxi with a Christian cabdriver, or bungee jumping with a Christian bungee cord. Because all those Christians will vanish, while the world descends into chaos.

So when I arrived home that day to an empty house, I knew it had finally happened. The Rapture had taken place, and I was left behind (if only I would have taken those two words and written a series of end-times novels, I would be living it up in Rio right now).

One afternoon last week I arrived home and Maile handed me an envelope. The address was handwritten to “The Smucker Family.” The sender was from Texas. Huh, I thought to myself, this looks like fun.

I opened it and discovered that the very people who are predicting the end of the world in a few days, the very people I had disagreed with on Twitter, had taken the time to find my address and mail me a series of tracts and handwritten warnings that the end was nigh.

And you know what? I am okay with that.

Because Jesus wants my world to end every day.

My world of putting me first.

My world of obsessions and addictions and hatred.

My world of judging and abusing and belittling.

There’s a world of things that needs to end. To me, May 21st sounds as good a day to start that process as any other.

“Deal as sparingly as possible with the things the world thrusts on you. This world as you see it is on its way out.” (1 Cor 7:31 MSG)

What worlds of yours need to come to an end?