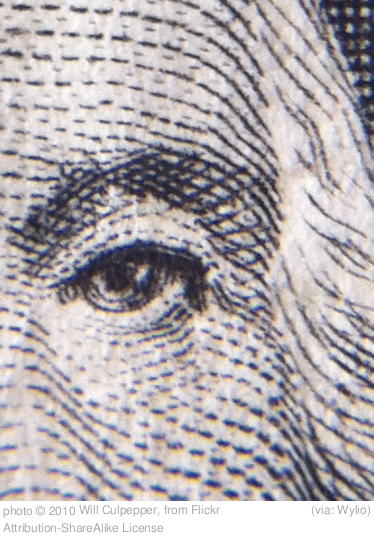 Remember “Choose Your Own Adventure” books? Well, this is a little experiment I’ve always wanted to try. I’ve written a scene – all you have to do is read it, and then choose where the story goes next. So play along and leave your choice in the comments section below.

“I’ll take a Super-Eight and three $5 Bingos,” the woman mumbled to the boy behind the register. He looked to be about 18. His ears were pierced and the holes stretched to the size of a nickle, filled with a clear circle. He stared at her for an extra moment, chewing his gum in wide, loping movements.

“Everything okay?” she asked him.

“Fine,” he said, shrugging, slowly pulling three tickets from the plexi-glass case, then turning to the Super-Eight machine.

“You got numbers, or you just want whatever?”

She pulled a small slip of paper from her pocket. It looked like the torn off corner of a page from one of those yellow lined notebooks. She slid the paper across the counter. It stuck to a missing dog poster that had been taped there for eight months. The clear tape edges around the golden retriever’s face were black.

The boy sighed, picked up the paper, and typed in the numbers.

He handed the lady her ticket. A hemp bracelet hung so loosely around her wrist that she had to keep grabbing it and gyrating her arm to move it up.

She put a $100 bill on the counter. The boy gazed at her with a bland look of disinterest.

“I can’t take that,” he said, this time with invisible ellipses between each word.

“I don’t know if I have anything else.”

She checked her pockets, finally pulled a lone credit card from her jeans, handed it to him, and raised her eyebrows as if to say, “Is this good enough?” But she didn’t actually say anything.

As he ran the card she started humming an eerie-sounding tune.

He pulled the receipt from the machine and handed her back the card without checking the signature.

“It freaks me out. Seeing right through you.”

The buzzer wasn’t working, and the door wasn’t locked, but she still pulled out her key, inserted it, and let herself in to her apartment building. She took the elevator up to the fifth floor – it groaned and wheezed like an old man getting out of bed. The apartment was small, but she didn’t need much space.

The place was freezing cold. Her keys hit the table with a sliding ching, and she dropped her bag on a chair in the corner. Someone had left the window open, and cold air poured in. This did not seem strange to her, even though she lived alone.

Before closing it, she peered down at the alley below: dark, motionless, further away than anything else in the world. Then she slammed the window shut, rattling the glass.

The stove was so clean, it looked like it had never been used. She filled a pot and put it on to boil. The kitchen sort of blended into the living room, and she found the remote control lying on top of the microwave. After three attempts the remote turned on the television.

A game show was ending. As the credits rolled in the bottom right hand corner, the main part of the screen was filled with the image of an old man pulling lottery balls. She glided to her small sofa and sat on the edge. For the first time that day, she moved with purpose. She pulled the hemp bracelet up from where it was slipping off.

The first three numbers had already been revealed, their identities posted at the top of the screen:

Confusion filled her face, as if her mother had just punched her in the stomach.

The next number came up:

She kind of shook her head, then stood up and scuttled over to her bag, began rooting through it as if it contained a live grenade that had to be discarded.  She finally turned it upside down and shook it. She heard the man on the television say the next number in his fake, “you are sure to be the winner” voice.

She couldn’t find the ticket.

Her body went numb. The only thing she could feel was the dry sensation of her tongue cleaving to the roof of her mouth.

Then she remembered. The small, cell phone compartment on the shoulder strap of her bag. The place she never put anything. She unzipped it in a frenzy. There it was: the ticket. She thought she might hyperventilate. She fell to a sitting position and closed her eyes, braced her hands against the cold linoleum of her kitchen floor. The man’s voice called out the final number.

This is where you get to choose what happens next:

3 – The power in the building goes out

Make your selection in the comments section before Friday, midnight. And tune in next Wednesday, when I’ll continue the story based on the most popular option…

(If you’ve never commented here before, it may not show up immediately. Rest assured. This is not the 2000 election. Your vote will count.)