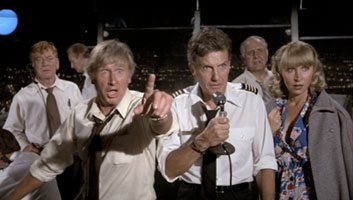 Perhaps one of the greatest movies of all time, “Airplane” was released when I was four years old. I think that deep within this movie lies some incredible secrets to writing. I know what you’re thinking:

“Surely, you can’t be serious?”

I am serious. And don’t call me Shirley.

1) A Credible Narrator – the reader wants to at least have the ability to trust the narrator. You can have great stories about liars, cheaters and preachers, but if the reader starts to feel like the narrator is lying, the foundational reason for moving forward begins to crumble.

For example, when the passengers lose confidence in the ability of the flight crew, chaos breaks out on the plane:

Elaine Dickinson: There’s no reason to become alarmed, and we hope you’ll enjoy the rest of your flight. By the way, is there anyone on board who knows how to fly a plane?

If your reader begins to doubt your narrators ability to “fly the plane,” they’ll start looking for an excuse to stop reading. And a parachute.

2) Know your identity as a writer, and stick to it. If your strength isn’t found in writing 18th century narratives written from the perspective of a button maker, then avoid writing them. If your name isn’t Shirley, don’t pretend to be Shirley.

Rumack: Can you fly this plane, and land it?
Ted Striker: Surely you can’t be serious.
Rumack: I am serious… and don’t call me Shirley.

Rumack knows who he is, and what he can do. You need to do the same.

3) Clarity – When writing, clarity is important. This exchange between the plane and the flight tower is a perfect example of the confusion that occurs in the absence of clarity:

4) Use your setting to help emphasize the tone of the piece and aid in characterization. But if you can’t do that, at least know where the story is taking place (as opposed to Elaine’s lack of awareness):

5) Referencing classics can add depth and additional layers of meaning:

Jack: What’s going on? We have a right to know the truth!
Rumack: [to the passengers] All right, I’m going to level with you all. But what’s most important now is that you remain calm. There is no reason to panic.
[Rumack’s nose grows an inch long]
Rumack: Now, it is true that one of the crew members is ill… slightly ill.
[Rumack’s nose continues to grow longer and longer, à la Pinocchio]
Rumack: But the other two pilots… they’re just fine. They’re at the controls flying the plane… free to pursue a life of religious fulfillment.

So there you have it, five valuable secrets gleaned from the recesses of a classic.

Don’t forget to head on over to Wednesday’s post – it’s the first time I’ve every tried to write a “choose-your-own-adventure-style” blog. Just read the story about a girl buying a lottery ticket, and then, in the comments, pick from one of five possible directions the story will go. Next Wednesday I’ll continue the story around the most chosen option. Deadline to have your vote count is Friday night, midnight.

To learn more lessons on writing, check out the following blog posts:

Five Writing Lessons I Learned From Dumb and Dumber

Five Writing Lessons I Learned By Having Dinner With B & E