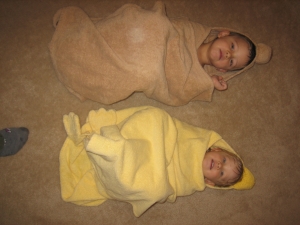 The hallway is short: when I sit down, with my back against the strip of wall separating two bedroom doors, my feet stretch to the end of it.

To my right, an opened door. The bathroom. The sounds of splashing water: our youngest two children, nearly 3 and 18 months, giggle and dump water on each other’s heads. They suck on wash cloths. They stand up, then slip with that squeaking skin-on-plastic sound and fall and cry for a moment. They drink the water. I tell them not to. Then they play again.

Jon Foreman’s voice sings to me from my iPod in the next room:

I pick up my book: Steinbeck’s The Moon is Down. It’s the first novel I’ve opened this year, who am I kidding, the first for a long time, and it feels good. It’s one of those fancy “Library of America” volumes, my favorite kind, with the sleek black dust jacket, the thin, heavy paper. And it’s a compilation, so I have Cannery Row, The Pearl and East of Eden to look forward to (even though I’ve read East of Eden four or five times, it’s my favorite book of all time to I’ll probably read it again when I get there, at the end of all the new things).

Steinbeck can say so much, with so little.

By ten-forty-five it was all over. The town was occupied, the defenders defeated, and the war finished. The invader had prepared for this campaign as carefully as he had for larger ones…

And from the other room, John Foreman.

And heaven knows, heaven knows
I tried to find a cure for the pain
Oh my Lord, to suffer like You do
It would be a lie to run away

***so as not to confuse anyone who knows my children, the picture is actually of our older two, when they were younger. How time flies.

2 Replies to “The Moon is Down”