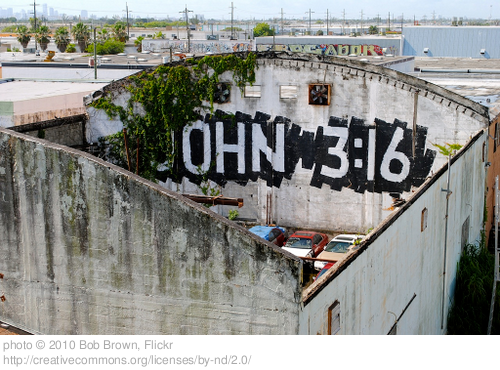 When I was a kid, I remember seeing that guy at nearly every sporting event.  Maybe you remember him – I’m talking about the guy holding up the John 3:16 poster behind the basketball net, or the uprights, or in the outfield.

For years he was always there, and I think, even today, he is fairly representative of our Christian culture: if you ask any Christian to give you the verse in the Bible that best explains the Gospel, they will probably tell you John 3:16.  And don’t get me wrong – it is a beautiful verse that tells an amazing story:

“”For God so loved the world that he gave his only Son, so that everyone who believes in him will not perish but have eternal life.”

What could possibly be wrong with that verse?

Actually, I don’t think there is anything wrong with the verse, but I think there is something wrong with how we have elevated it above every other verse in the Bible.  Do we really believe it’s possible to take one passage and use it, by itself, to explain something as complex as the line between perishing and eternal life?  If one verse can adequately explain that, then why do we still have the rest of the Bible?  What happened to context?

I think the main reason the modern evangelical community fell in love with John 3:16 is that it simplifies the most pressing question in our brains: who is in, and who is out.  This is our obsession.  We believe the Bible’s main purpose, and by extension Jesus main purpose, is to get us into heaven, and when we identified a verse that in some way answered that question in a simple formula, we latched on to it.

There are several problems that occur when John 3:16 becomes our basis for a spiritual life:

1) helping the poor and needy, the widow and the imprisoned, become non-priorities when compared to the importance of ensuring that everyone believes the right thing (“whoever believes in him”).  This particular verse, in and of itself, displays no urgency when it comes to helping the disenfranchised.  The only concern it discusses is who is in, and who is out.

2) it is easy to leave out any emphasis on a changed life when confessing belief is the end all and be all.  In other words, since all I have to do is believe certain things in order to get into heaven, the actions that come after that are not important, and can be easily disregarded.

3) Since our John 3:16 faith gives us such a stark line between those who are perishing and those who are entering eternal life, judgment becomes the central issue of Christianity, one that suddenly becomes easy to navigate because the one distinctive seems clear: belief.  We then take this knowledge and use it as a sledgehammer on the heads of anyone who doubts.

4) Thus, at best, we’re not sure what to do with those who follow Christ but have doubts regarding their faith. After all, isn’t it all about belief?  If belief in Jesus wavers, does that mean we will perish?  Doesn’t the presence of doubt equate to the absence of belief?

I wonder what our modern day Christian culture would be like if we had chosen a different verse to rally around?  What if, for example, we decided that our attitudes and actions should be dictated, not just by John 3:16, but also by John 3:17:

“God did not send his Son into the world to condemn it, but to save it.”

What if our key verse continually reminded us that Jesus main purpose did not involve judging the world? *gulp*

What if our spiritual lives centered, not around the measurable criteria of spoken belief and the number of people we’ve led through a prayer, but around a life of Christ-centered non-judgment that led others to find him through love and acceptance?