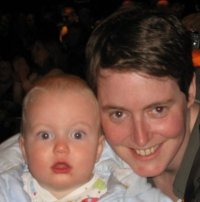 I have to tell you all about a friend of mine – her name is Jen Hudson. On Jen’s Facebook page she said it the way that only she could: “I live in Aylesbury, Bucks. I am married to Dave and we appear to have some small people that live with us too. Ella is nearly 9, Sidney is 7 and Jude is 3. Help!”

First – Maile and I lived in England from ’01 to ’05, and we made some amazing friends while we were there.  They were quite kind to us, considering most of England wasn’t too happy about the Americans leading them to war in Iraq.  Dave and Jen were just one family from Southcourt Baptist Church that took us in and befriended us.

The winter before we left England to move back to the States, Jen and her family received terrible news: Jen had breast cancer. Their family was immediately plunged into that life of treatments and tests and chemo and operations and radiation.  There were so many reasons that it was hard for us to leave England – but leaving then, knowing that their family was fighting so hard, made it particularly so.

Jen battled cancer in a way I have never experienced. It seemed that every other month we were receiving completely opposite reports – at one point the cancer seemed to have taken over her body and the doctors gave her a short life expectancy.  The next month we would hear that she was fighting hard, doing better. Through it all, she and I had some good battles playing Scrabulous on Facebook – she had been a librarian at one point in her life, and usually took me to task.  She liked talking trash, which made it even worse.

For those of you who know how much I love Scrabble, you’ll understand this was difficult for me to handle.

Then, just as she was receiving radiation treatment, miracle upon miracle: she found out she was pregnant. Impossible, the doctors said.  Insignificant, as the baby will probably not survive the radiation – so she put off her treatments until little Jude was born.  Then, immediately, she resumed her own personal war against cancer.

For the last year we never heard too much.  An email every once in a while.  The occasional Facebook update:

Jennifer Hudson has been looking for my mobile and it was there all the time!

Jennifer Hudson will not be on fb for a while

Status updates like that last one always worried us.

This week, on Tuesday, another dear friend Melody Walker IMed me on Facebook: “Jen needs your prayers.  She’s struggling.  It’s serious.”  That was a hard conversation to have, especially on the computer.  Maile and I prayed for Jen and Dave and their three adorable kids.  We both cried some.

Then Wednesday, Melody again, in a little box popping up on the side of my screen:

“Jen passed this morning.  Pray for the family.” She was 36 years old.

So many mixed feelings tonight as I sit here, a few thousand miles away from Aylesbury, England.  My throat aches as I mourn the loss of a friend.  My soul feels so heavy for Dave and Ella and Sidney (born a few weeks before Cade) and little Jude (just a bit older than Abra).  Yet I feel a sense of peace for Jen, that she isn’t suffering any more.

There is nothing like death to remind us of the most important things in life.  Hug the people you love today. This is the first I’ve written of Jen’s passing, and I feel a certain stillness, a peacefulness, a reluctant sighing that somehow, once again, God will redeem this situation.

So tonight (Thursday) I went to Jen’s Facebook page. I went there many times today, and soon friends began writing on her wall, talking to her as if she was right there, waiting to deliver one of her signature one-liners in response.  I’m finding it hard to compose myself as I write this.  Anyway, I wanted to write something to her, but nothing seemed fitting.  Nothing was good enough.  I just kept imagining Dave and the kids in their house in Aylesbury, England, no doubt surrounded by friends, but missing her terribly.

So, as usual, I turned to a book.  Which in Jen’s case, I hope was fitting, as she seemed to love books as much as I. It was the last page of CS Lewis’s Narnia Chronicles, in “The Last Battle”.  The children, having re-entered a newborn Narnia, turn questioningly to Aslan, as if to ask why they were there.

“There was a real railway accident,” said Aslan softly.  “Your father and mother and all of you are – as you used to call it in the Shadowlands – dead.  The term is over: the holidays have begun. The dream is ended: this is the morning.”

And as He spoke He no longer looked to them like a lion; but the things that began to happen after that were so great and beautiful that I cannot write them. And for us this is the end of all the stories, and we can most truly say that they all lived happily ever after. But for them it was only the beginning of the real story.  All their life in this world and all their adventures in Narnia had only been the cover and the title page: now at last they were beginning Chapter One of the Great Story which no one on earth has read: which goes on forever: in which every chapter is better than the one before.

This gives me hope.  I don’t think I’ll go back to Jen’s Facebook page again.  I think I’ll just wait for the real deal.