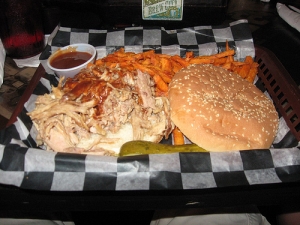 Maile and I spent the last two weeks with her family in Charlotte, North Carolina. Every time we come down here I’m reminded that there is still a North/South divide – not because they’re still openly planning a revolt against the North (that’s mostly still done in secret), but because things seem so different.  Here are 10 things I love about the South:

1) Sweet Iced Tea – this sugar/caffeine combination is jet fuel for the human tank.  But if you order iced tea in the South, don’t ask if it’s sweetened.  I did this once, and the lady behind the counter looked at me like I was an escapee from the local asylum and began feeling for the under-the-counter alarm button. In their mind, all tea is sweet. I love this about the South.

2) Pulled Pork Sandwiches – I still haven’t figured out what about it is pulled, but it’s delicious.  My wife likes to pile on the cole slaw, which I think is disgusting, but she’s got southern blood in her.

3) The Local Spots – Maile and I grabbed breakfast at a little place in Belmont, NC the other morning.  The waiter came to the table and asked us what we wanted.  “Um,” Maile said slowly, “can we get a menu?” I let her do the talking – she speaks better Southern than I do.

The waiter looked at us in confusion.  “You’ve never been here before?”  We both shook our heads.  He shook his head in sympathy, pulled up a chair, and sat down at the end of our booth.  “We’ve got french toast or pancakes or gravy and biscuits.  Most people that order eggs get toast and grits and choose either bacon or sausage.” Maile and I still looked at him.  Then we realized – they didn’t have menus.  What a great idea – just order what you want.

4) They know each other – when we were eating breakfast at that place in Belmont, you could tell that everyone knew everyone else.  The waiter asked every single person that walked in if they wanted their usual – or sometimes he brought out food without them even ordering!

5) They love the heat – unlike in the North, where we complain about the cold EVERY SINGLE WINTER (c’mon folks, you know it’s coming – either move or learn to love it), they say they love the heat.  Do they really love the heat? I don’t know.  But everyone says they do.  And anyone who dares to even barely dislike the heat still qualifies their disdain: “It’s hardly ever this hot,” they say.  “Maybe one week out of the year it’s this hot.” Now, I know it’s hot most of the summer, but I like that they try to convince themselves that’s not true so that they can live in happiness.

6) Smiling people, even in the city – ever try saying hello to some random person on the sidewalk in Philadelphia? Of course not.  If you did, you probably wouldn’t be around to read this blog.  Ever try it in the South? Be prepared for a warm greeting in return.  And perhaps even a lengthy conversation – which might seem a bit unsettling to you Northerners.

9) Swimming Pools – they are everywhere.

So what do you love about the South?