When I first thought of the idea of Top Ten Tuesdays, it was with this ideal in mind that we could come together as an international community and agree on something (it is at this point that I have to give a shout out to my loyal British following, my 17 visits from Tanzania, as well as my solitary followers in Hong Kong, Bangladesh and New Zealand).  Don’t we have enough to fight about:  Red v. Blue, North v. South, East v. West, Men v. Women, Chelsea Football Club vs everyone else?

I had no clue that the opinionated, individualistic nature of our humanity went as deep as favorite types of candy, 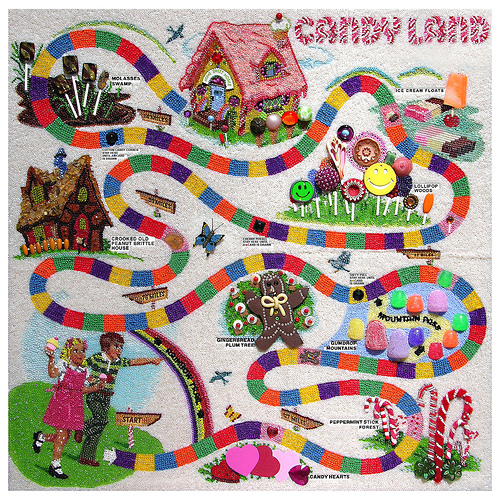 or snack food, or even ice cream for goodness sake.  And I certainly had no idea that certain people, who will remain unnamed, would counter my offer of international commonality with divisive little lists of their own, and then post them in the comments section of my blog.

But this is exactly what has happened.

So today I give you the top ten games from our (notice the OUR) childhood. Tear it up if you want.  Rip it to shreds if you must.  But before you do, just remember – this may be the last fragment of shared humanity left on this spec of dust we call a planet.  Blow it to smithereens at the risk of your own existence.

(This week they are listed in no particular order, in an attempt to find some kind of common ground)

Candy Land – when my children were old enough to play this, and we opened it for the first time with them, I saw the rainbow road and that three-colored ice cream bar, and suddenly I was 6 years old again.  Then I got stuck in that blue, syruppy quagmire while my son cruised to victory (he did a victory dance around the living room), and I wished I was 6 again, so that I could stick my tongue out at him and call him “poopy-face”

Trouble – the spring-loaded, bubble-encased dice did cause a potential problem for this game.  But it was very portable, which made it a traveling favorite.

Chutes and Ladders – or, as you Brits refer to it, Snakes and Ladders (and, actually, Milton Bradley sold it over there first, so TECHNICALLY I should have listed it as the latter).  Who didn’t love seeing their opponent nail that last chute (or snake) and come tumbling back to the bottom of the grid?

Monopoly – we didn’t really know how to play this when I was 6, but the pieces were cool, and the money worked really well for some of the other pretend games we made up.

Sorry – another classic we recently introduced our kids to.  Another game at which I cannot win, no matter how many rules I make up.

Uno – how many people knew that you could take a foreign word, stick it on a pack of numbered, multi-colored cards, and make millions?  I guess just Uno.

War – why was this one of my favorite games as a kid?  You know, the one where you take a deck of cards, split it in half, then flip cards and whoever’s card is highest gets both.  And then the real moment of international intrigue – two cards of the same value are flipped, and war breaks out.  This was probably a favorite of the confrontational ones among us, who will still remain nameless.

Yahtzee – did you ever play this game by yourself when you were a kid, sometimes giving yourself four or five throws per turn (instead of the allotted three), which of course gave you incredibly inflated scores you would then show to your mother and brag about?  Yeah, me neither.

Scrabble – did you ever play this game by yourself when you were a kid?  Okay, I did that.  I was a nerd.  This is why I knew at a young age that the highest scoring word you can use is quartzy (according to some schools of Scrabble), and the longest legal word in North American play is ETHYLENEDIAMINETETRAACETA TES (which is dumb since the board is only 15 spaces across).

So what are the favorite games from your childhood?

13 Replies to “Tuesday’s Top Ten Games from My Childhood”