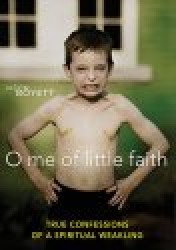 “I am a Christian.  I have been a Christian for most of my life.  But there are times – a growing number of times, to be honest – when I’m not entirely sure I believe in God.  There.  I said it” – Jason Boyett, O me of little faith

Before I get into the book review, let me start by giving you a picture.

Imagine that you had a terrible wound.  I don’t know how you got it – maybe you were stabbed, or cut, or you fell and broke a bone.  Whatever the case, it’s serious.  There’s blood everywhere.  You can see bone sticking out.

Then imagine you went home and put a band-aid on it.

That would be stupid.

I think a lot of people have wounds associated with their doubts regarding faith and God. But instead of letting others take a look at it, dressing it properly, and letting it heal (there will always be scars), they hastily cover it up.  With a band-aid.

And the wound that led to doubt gets infected, and it starts to eat away at the rest of them.

In Jason Boyett’s book “O me of little faith”, he rips the band-aids off.

Initially it doesn’t feel great (I’m kind of a hairy guy, so ripping band-aids off has some side affects). In fact, during the first three chapters I found myself getting more and more frustrated with Jason as he dug around in the wound, inflaming my own doubt.

“Dude, that hurts,” I found myself saying.  “I don’t think you should be pushing on that.  It might be best if you just let that one alone.”

But as I worked through the latter half of the book, I found myself coming to terms with the doubts that I have – Jason’s list of belief statements helps with that, as do some of his ideas for dealing with doubt:

admit doubt to God and others,

take a leap of faith,

live in committed obedience to the teachings of Jesus,

and keep looking for incarnational moments, when God is present

I’m still not sure about my analogy – I don’t think doubt IS the wound.  More likely doubt is the RESULT of the wounds we receive at the hands of an over-religious church, or life’s deep disappointments, or unresolved questions about the pain-riddled world in which we live, or the inconsistencies we perceive in the scriptures.

But I am convinced that when we expose our wounds, along with our doubts, there is a type of healing that can take place – not the kind that leaves you feeling certain and doubt-free, but the kind of healing that somehow allows faith and doubt to coexist.

Jason Boyett is a freelance writer and speaker from Amarillo, Texas.  Check out his blog HERE for more details about him.  Click HERE to check out his book. And stay tuned for a question and answer session coming up soon, where Jason agrees with every single one of my top ten choices (kind of) and promises never to hack his way on to my web site again (okay, neither of those is true, but it’s a great q&a).