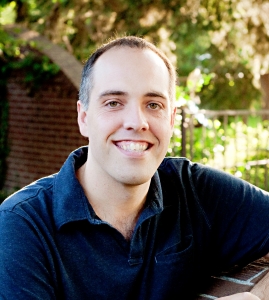 This is a guest post by author Matt Mikalatos.  For a review of his book, “Imaginary Jesus”, check out yesterday’s post.  Now take it away Matt!

I finally had an agent on the phone.  He loved my proposal and hated my sample chapters.  “I can tell you’re a deeply weird person,” he said.  “But you’ve given me the typical Sunday School book that’s the same as everything else out there.”   He didn’t want to represent me, but would look at the next draft to let me know if I was “on the right track.”   Determined to prove that I was as weird as my proposal suggested, I set out to embrace my Weird – that singular place of absolute uniqueness within each person where all of our deepest and strangest skills, thoughts and passions reside .   Here are four lessons I learned along the way about letting that Inner Weird out of your basement and into the living room.

NUMERO DOS: Severely damage your internal editor. Studies show that the number one cause of Non-Embracing-Of-Inner-Weirdness-For-Writers is an overactive internal editor.   This is the little voice which says, Hey, should you really be putting a colon in the middle of that sentence? and also Let’s be serious, you know that there is no such thing as a talking cat.     Don’t kill your editor, you’ll need him later.   But you need to at least tie the editor up and stick him in the broom closet until your first draft is done.   Stop re-writing the same page over and over.  Stop asking should I include this? and just write it down. You can always come back later.

NUMBER C: Embrace your inner Weird. You know that apathetic feeling that comes over you at a bookstore sometimes when you are looking for a new book but can’t find one you want?   You are (secretly) thinking to yourself, “I wish someone would write a mystery novel/romance where the main character is an Amish vampire, darn it!”   You should write that book. Other people are wishing for that same book (even if they don’t know it yet). Stop spending time trying to figure out what is hip and what is selling.   By the time you figure it out, it will have changed.   Here are some books no one knew they wanted until they read them:

Endless thousands of pages about an orphan boy learning to be a wizard.

A series of books about Jesus being an inter-dimensional lion.

A book about God living in a shack in the woods and making pancakes.

A semi-autobiographical comedy/theology novel about destroying imaginary Jesuses with the help of the Apostle Peter , a talking donkey and a friendly atheist.   Yup, that one’s mine.

Roman Numeral IV. Be a professional Weirdo. Being a weirdo is not enough.   Just ask Gonzo from the Muppets.   Did he settle for being some sort of bird thing with a crooked nose ?   He did not.   He sharpened his skills until he could teach twelve chickens to water ski while bawking out The William Tell Overture.   Present your weirdness with top notch work.     This is where you can let your internal editor out.   He will say, “GREAT CAESAR’S GHOST WHAT IS THIS MESS?”   That’s fine.   Set him to work, but keep him on a tight leash.   Write your best, re-write diligently, and be polite when you communicate with agents and publishers.

Afterword: Weird love. As for me, I wrote a novel that looked like C.S. Lewis, Dave Eggers and G.K. Chesterton got in a fight and then turned their notes over to Kurt Vonnegut.   I had a blast writing it.   I sent it to the agent who didn’t want to represent me and my phone started ringing the moment I hit send.   A few months later we had two offers on the table to publish the book.   I thought people would be waiting in line to smack me in the face once they read the book, but au contraire, the book I wrote for my deepest self spoke to a lot of other people, too.

Now stop reading blogs and go pound out that Amish Vampire Detective novel, because we all want to read it!

Matt Mikalatos works full time for Campus Crusade for Christ, and his first novel, Imaginary Jesus, came out earlier this month from Tyndale/Barna Books. He is hard at work on his encore presentation, which is the weirdly titled “Night of the Living Dead Christians.”  If you would like to WIN A TRIP TO PORTLAND to hang out with the weirdo and win a bunch of swag (Amazon Kindle, iPod, a hundred bucks to spend at a local bookstore, etc.), then check out the writing contest at http://myimaginaryjesus.com.

If you are new to this site, have a look around! Mondays, Wednesdays and Fridays are generally dedicated to the topic of identity and purpose, Tuesdays are usually occupied with highly controversial top ten lists, and Thursdays, like yesterday, carry book reviews.  If you don’t know where to begin, click here for my most popular post.

One Reply to “Embracing Your Inner Weird”